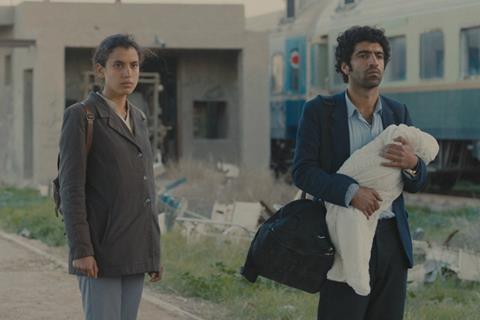 This lean drama is set entirely in and around Baghdad train station, a device designed to allow writer / director Mohamed Al-Daradji to include as broad a cross-section of Iraqi society as possible. At the centre of the story is an uncomfortable encounter between secular Iraq, represented by opportunistic hustler Salam (Ameer Ali Jabarah), and the religious fundamentalism which drives Sara (Zahraa Ghandour) to stand at the heart of the station with a bomb strapped to her chest and the aim of ‘purifying’ her country.

What the film lacks is a sense of context, mainly because of the choice to moor the story in a single location and a relatively brief window of time.

Although somewhat schematic in its choice of scenes and supporting characters – at times it feels as though the filmmakers were working through a checklist of Iraqi archetypes – the main narrative moves at a brisk pace. The talking point subject matter of the film should ensure further festival interest following its Toronto, London and Tallinn berths, and it could connect with audiences through curated VOD platforms.

The date is December 30, 2006. It’s a red letter day for the people of Baghdad. Not only is it the first day of Eid, it is also the date of the grand reopening of the train station. Along with officious policemen and milling passengers, a contingent of highly strung American soldiers are loudly keeping the peace. It is this American presence which has marked the station as a target for an attack, an operation which is orchestrated by shadowy figures that we never meet.

Sara is poised to detonate her bomb, thumb hovering over the button, when Salam crashes into her life. He spins her a well-practised line about being the country’s premier importer of prosthetic limbs. But Sara is not in the mood for idle flirtation, and takes him as her hostage. The bluster leaves Salam and, deflated, he speaks from the heart for the first time in years, in an attempt to change Sara’s mind.

Along the way, the couple encounter a desperate woman who entrusts them with her baby daughter; a pair of lovable scamps who clean shoes and hawk flowers to passengers and a father grieving a son lost to a suicide attack. Each encounter further shakes Sara’s faith in her cause.

The striking contrast between the two main actors makes for a intriguing, and sometimes jarring dynamic: Ghandour is restrained, her face a tense, hard mask which is almost unreadable; Jabarah is demonstrative, voluble and mercurial. The titular journey that both will undertake is a spiritual rather than a physical one, since neither character manages to get far from the station.

Music is effectively used – a mournful solo oboe motif is lifted from the songs that a band of itinerant musicians play to the bustling travellers. And deft camerawork makes sense of the thronging chaos of the station building.

What the film lacks is a sense of context, mainly because of the choice to moor the story in a single location and a relatively brief window of time. Unlike the thematically similar Paradise Now, we are not given a chance to see the life that the potential suicide bomber is willing to give up. And this, along with the fact she is planning to murder a bunch of innocent people, makes Sara a difficult character with whom to engage.