‘The Other Tom’: Venice Review 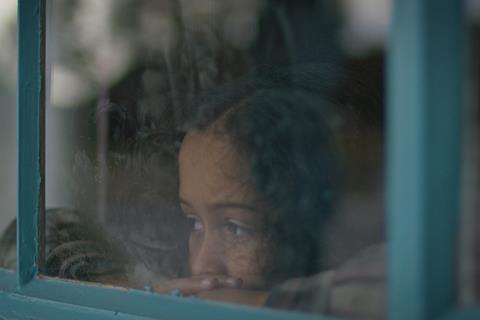 Sharing writing and directing credits for the first time on this small, empathetic drama, Rodrigo Pla and his writing and life partner Laura Santullo take aim at the issue of the drugs routinely prescribed for children with Attention Deficit Hyperactivity Disorder (ADHD), and the way figures of authority coerce and condemn parents who attempt to take their children off the medication. Set in El Paso, Texas, with dialogue largely in English, The Other Tom is also an intimate study of the relationship between a young, stressed, unschooled Latino mother trying to make ends meet and her wayward handful of a son, cemented by two powerful central performances.

Israel Rodriguez Bertorelli is a revelation as Tom, a kid who is either in constant motion or a variety of brief catatonic fugue states

The Mexico-based duo’s last film, A Monster With A Thousand Heads (2015), on which Santullo took screenplay credit, also centred on how ordinary people can be crushed beneath the wheels of today’s faceless public-private health systems. But that was a wild ride of a thriller with a black comedy edge. Based on Santullo’s novel of the same name, The Other Tom is a quietly absorbing drama about – among other things – a woman who tries to resist the medical and parenting advice of those who ‘know better’, and ends up risking losing custody of her child as a result. The resulting film is both warm and reticent at the same time, so keen to cleave to reality that it shuns dramatic fireworks – particularly in its gentle, muted ending. That will make it a harder sell, but at the very least further festival action is assured after the film’s debut in Venice’s Horizons sidebar.

It’s not mentioned anywhere in a film that avoids exposition, but informed audiences will be aware that the backstory here is the massive, well-documented surge in diagnoses of ADHD to the current level of almost one in ten US children, and the fact that two-thirds of those are on medication such as Adderall. This is far from our thoughts at first – if anything, we begin by reading another meaning into the title, as until Tom is called out by a teacher in his classroom after acting up, one could be forgiven for mistaking the gender of this primary school kid with his soulful eyes and waist-length wavy hair, whose safe place is a wardrobe among his mother’s dresses.

Nobody makes anything of his ‘difference’, least of all Elena, Tom’s tough single mother, who wears a necklace with the word BONITA spelled out in metal letters and brings guys home from nights out with her girlfriends – yet works as a forklift truck driver. But The Other Tom suggests – perhaps just a little too hesitantly to be heard by all – that it’s not just ADHD drugs that can engineer disassociation. There’s an undertow of deep-buried disapproval of the ‘other’ – whether this judgement is based on ethnic, sexual or lifestyle choices – that peeps out from behind the curtain of disapproval and institutional surveillance that surrounds Elena when, after Tom is injured in an episode that may or may not have involved ADHD-drug-induced depression, she throws his medications in the trash.

Whether it’s casting, long prep sessions or the boy’s natural talent – most likely a mixture of all three – young Israel Rodriguez Bertorelli is a revelation as Tom, a kid who is either in constant motion or a variety of brief catatonic fugue states. But first-timer Julia Chavez is equally impressive as a young woman with a fiery temper who nevertheless possesses enough emotional intelligence to learn from a son she realises is smarter than she is. There’s a brilliant moment when, after a stand-off sparked by her need to earn more money by doing overtime so she can afford to let Tom visit his absentee dad in Mexico (at least that’s the story she sells her son), he pushes a piece of paper under the door of the bedroom he’s locked himself into. He wants that promise signed and in writing.

Visually, this is a film that alternates tender family moments in the modest, run-down home shared by mother and son, with others in the world outside that underline its hostility. When Elena swears at a doctor who refuses to take Tom off his meds, she’s seen through glass, from the receptionist’s point of view. In a US post office where she has gone to pick up a package, we watch Tom in the background, out of focus, as he throws himself repeatedly at an air inflatable in the forecourt. Gradually, without anything being said out loud, mother and son grow together – finally escaping to Mexico, where Tom suddenly seems like a pretty normal nine-year-old. What if the problem were not ADHD, this thoughtful film seems to be saying, but a world in which boisterous kids need to be sedated so as not to bother their teachers, parents and anyone else who’s watching?