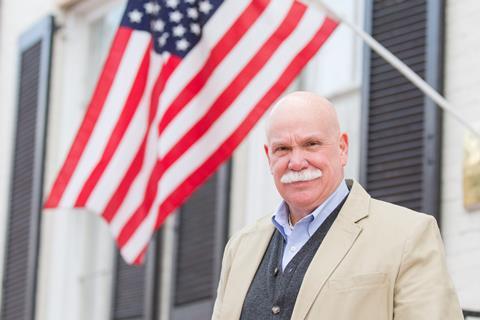 In the US, everything is political, and politics are local. And this includes the role of the Sheriff. An iconic figure, familiar from decades of popular culture, the firm but fair Sheriff represents law and order, a man (and it’s almost always a man) with a “manifest destiny – the only person that can tame this wild town.” But he must also be, as this revealing film demonstrates, a shrewd political operator. For the sheriff is not appointed by his peers, he is an elected official – a fact which is not widely known outside of America. This fly on the wall documentary follows the 2018 midterm elections in two counties, highlighting the increasingly partisan political landscape and raising timely questions about structural and ideological issues in US law enforcement. It also demonstrates just how appealing to swathes of the country is the Trumpian rhetoric which provides a backdrop to the film.

Given that the US audience will presumably be more or less familiar with the election process which decides who gets the most powerful job in law enforcement in each county, The Sheriff may end up playing best to audiences outside of America. That said, the characters followed by first time director Grace Sweeney are colourful enough to make this an entertaining proposition, even for those well versed in the mysteries of US politics. Handsome photography will add to the film’s appeal, both on the festival circuit and possibly to specialist documentary distributors.

Standing for his fourth term in Frederick, Maryland, Sheriff Chuck Jenkins, with his florid meat brick of a face, is the kind of good old boy who is beloved by rural conservatives. He’s tough on undocumented immigrants, boasting about the kind of profiling which looks a lot like racial harassment. His favourite film is Gladiator – there’s a signed photograph of Russell Crowe on the wall of his office – and he sees a parallel between that film and the electoral process; “You walk the other guy into the arena and you kill him.”

The “other guy” - Jenkins prefers not to say his name – competing for the Sheriff’s badge in Frederick County is Karl Bickel. The Democratic candidate, Bickel argues that Jenkins’ obsession with border control – something which, he says, should be a Federal issue – is distracting the Sheriff from the real problem in the county: the spiralling opioid crisis. While he stops short of accusing Jenkins outright of being a racist, the inference is hard to miss.

Meanwhile, in Durham County, North Carolina, Clarence Birkhead looks likely to be voted in as the first African American Sheriff and is pounding the streets, reassuring the residents, one by one, that he represents the much needed change that the community needs.

Interviews with pundits and commentators succinctly highlight the issues inherent in a public vote for a Sheriff with a political allegiance. “Sometimes the popular decisions are not the best decisions,” says one, as the film cuts back, once again, to footage of Donald Trump.

With plenty of reverb and slide guitar, the score goes all out on atmospheric Americana and nods, deliberately, to the country’s melting pot of cultures. Sweeney deftly juxtaposes striking shots of the country, which encapsulate lush beauty and optimism, with voice-overs which speak of a darker truth.