‘The Song Of Names’: Toronto Review 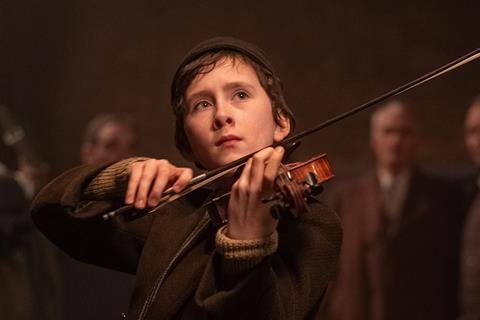 ‘The Song Of Names’

The novelistic origins of The Song Of Names are all too apparent as its spans decades, crosses continents and doggedly follows a plot that requires some great leaps of faith. The consequences of a mysterious disappearance ripple down the years but the muted emotional pay-off doesn’t entirely justify the exertions required to solve that mystery. A respectable, middle-brow drama, the film has its best chances commercially by playing to older audiences and classical music fans.

Some 20 years after his signature success with The Red Violin (1998), director Francois Girard would seem the perfect choice to bring Norman Lebrecht’s 2001 debut novel to the screen. The combination of mystery and music play to his strengths, so it may be the many neat contrivances of the novel that result in such a methodical, old-fashioned film.

In 1951, Polish violinist Dovidl Eli Rapoport (Jonah Hauer-King) is about to give his first public recital in London. The event is much anticipated, the auditorium filled to capacity. Yet he never arrives, and is never heard from again. Thirty-five years later, his closest English friend Martin (Tim Roth) is attending a music competition in Newcastle. A gesture by one young contender reminds him of Dovidl’s playing style, and prompts a quest that sees him haring from London to Warsaw and eventually New York in search of the truth about what happened.

Modern sequences are interlaced with a welter of flashbacks showing how the young refugee Dovidl (Luke Doyle) was given sanctuary by Martin’s father Gilbert (Stanley Townsend). Resentment turns to firm friendship. Wartime years are like a re-run of John Boorman’s Hope And Glory as the boys find an adventure playground amidst bombed streets, rubble and air raid shelters. Martin (Misha Handley) grows to accept that the arrogant Dovidl has become the apple of Gilbert’s eye.

When Dovidl is unable to discover if his family have survived the war, the uncertainty provokes him to abandon his Jewish faith. Loss, abandonment and matters of faith become the central themes in a handsome production where the period cars gleam like new, wartime London is dappled in bright sunlight and interiors have a warm glow.

The biggest issues reside in a story where the revelations often seem blindingly obvious and the plot begs more questions than it answers. How does the mature Martin afford his globe-trotting obsession? Why couldn’t Dovidl merely have told him what happened? Why does everything seem to fall so easily into place 35 years after this defining moment? The people Martin encounters all seem to have crystal clear memories of long ago events.

There are some emotional highpoints in The Song Of Names, from a duelling violins contest with Dovidl’s tragic Polish rival in a wartime air raid shelter to a reunion in which Roth’s reasonable, mild-mannered Martin finally unleashes the anger and pain that have festered away. Roth lends gravitas and sincerity to film and has the better of the two roles. Clive Owen doesn’t seem entirely comfortable as the adult Dovidl although, ironically, the film ultimately leaves you wishing it was his story that had taken centre stage rather than Martin’s dogged search for truth and closure.

Screenplay: Jeffrey Caine based on the novel by Norman Lebrecht