'This Is Not Berlin': Sundance Review 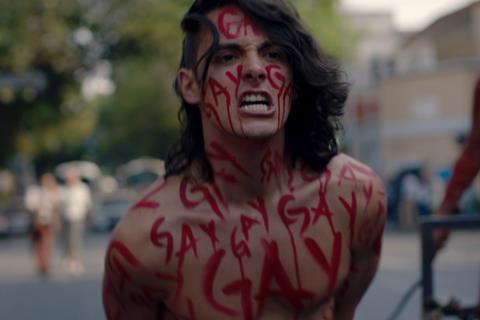 This Is Not Berlin

This fourth feature from director Hari Sama is a semi-autobiographical odyssey through a little-acknowledged period of Mexican creative rebellion. It’s a sensual coming of age story, with the foal-eyed Carlos (Xabiani Ponce de León) drifting into Mexico City’s mid-80s sexually fluid counter-cultural underworld. But perhaps just as satisfying is the way Sama’s film captures the quicksilver sparks of an artistic moment – the point at which a loose bohemian community collectively finds its voice and forces the mainstream to take notice. A soundtrack of post punk art rock, smashed glass and attitude adds to a thrillingly confrontational sense of time and place.

This Is Not Berlin arrives in Sundance having already won two prizes at Impulso Morelia, and it also screened at Ventana Sur at the end of last year. Festival interest should be keen, and LGBTQ events in particular will likely take an interest. There is arthouse theatrical potential too for this is a handsomely put together period piece, which captures its moment eloquently but also may chime with a new generation which is raising its own voice in dissent.

Carlos is rail-thin and poetically under-nourished-looking. He peers through a tumbling mop of curls at the ritual inter-school battle that unfolds around him – he’s in the middle of the ruck, but, as with so much else in his life, he’s also slightly apart from it all. With an absent father and a mother who is medicating away her disappointment with knockout doses of rohypnol, Carlos constructs a support system from his best friend Gera (José Antonio Toledano) and his cool, motorbike-straddling uncle Esteban (director Hari Sama doing double duty in front of the camera as well as behind).

But when a gift for fixing broken synthesisers buys Carlos and Gera entry into the Azteca, a hip alternative club where hedonism and drugs abound, Carlos swiftly finds himself adopted into a new family. Nico (Mauro Sánchez Navarro), his spiritual guide, has smokey goth eyeliner and cheekbones which can be read as either a threat or a promise. Nico’s inner circle is a Factory-style smorgasbord of sexual availability, performance art and punk poetry.

For a 17-year-old who is too shy to admit his crush on Gera’s cool Patti Smith-quoting older sister Rita (Ximena Romo), this fast track into a world in which, finally, he feels at home is as thrilling as it is dangerous. But as Carlos embraces the alternative lifestyle, the school acquaintances who tolerated his weirdness now use it as a weapon against him. All except Gera, who, feeling abandoned, seeks his own route into the art punk underworld.

Using restless handheld camera and scrappy black and white super 8 footage, Sama captures an assault of ideas and opportunities. The artwork ranges from Dadaist provocations, techno-fetishist erotica and anti-consumerist industrial performances using drills and cars to an art terrorist takeover of a football game. Music, which is central to the world that Sama creates, is impeccably sourced, bringing both energy and authenticity to the picture.

There’s a certain inevitability in the narrative trajectory – impressionable teens living fast before they have worked out how to use their brakes tend to end up in a crash. But although Carlos gets his fingers burned, he also emerges with his eyes open, and with a direction in life which he didn’t have before.