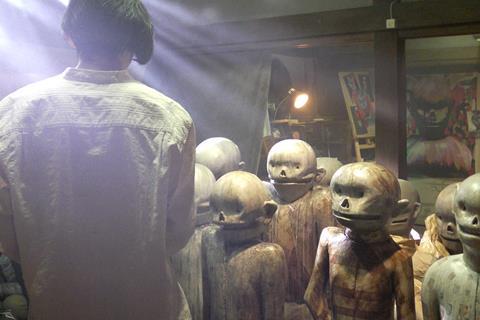 This schlocky Japanese horror about murderous, sentient modelling clay which creates havoc in a small provincial art school is so inept, you start to wonder if it’s deliberately so. Whether intentional or not – and it seems likely that the latter is the case – Vampire Clay is frequently hilarious, and drew a spontaneous round of - admittedly derisive - applause after its screening at the Tallinn Black Nights Film Festival

Characters are required to stand around, apparently too paralysed with fear to run away, while the killer modelling clay oozes inexorably towards them

It comes to something when the only tech credit you can single out for unequivocal praise on a film is the foley artist who provides all the squelching noises. Vampire Clay seems best fitted for the rowdier, responsive audiences of midnight screening slots. Outside of its festival career, a conventional release model would probably be unrealistic. However the film might gain cult traction through one off events in the same vein as the interactive screenings which turned The Room into a phenomenon.

Vampire Clay opens with a list of statistics which details the number of applicants to various Japanese arts schools compared with the number accepted. It’s a curious choice. Although the simmering sense of small-town inferiority and the tacit rivalry between students is present in the story, it’s hardly integral to the evil clay and its killing spree.

The Aina academy has recently relocated to a spooky new building. While doing a spot of gardening, the proprietress unearths a bag of buried clay. The clay finds its way into the hands of Kaori, a student recently returned from Tokyo, who notes that it feels somehow different. Malevolent, perhaps? After Kaori cuts herself on a blade which has mysteriously concealed itself in her work, her blood is absorbed by the clay. It extends wobbly stop motion animated tentacles, attaching itself to Kaori’s main rival and slowly engulfing her.

The clay has a mighty powerful appetite and cuts a swathe through most of the students in a matter of minutes. The survivors find themselves in a kind of whack-a-mole scenario, clobbering the obscenely phallic protrusions of clay as soon as they poke out. Director Umezawa approaches the flesh melting special effects with relish, but the inherently solid, sticky nature of clay means that it’s not particularly credible as peril. Characters are required to stand around, apparently too paralysed with fear to run away, while the clay oozes inexorably towards them.

Fortunately, a man with a portable blast furnace and a dab hand at exposition arrives to subdue the clay and explain the backstory – something to do with an underappreciated artist and illegal toxic waste products.

Vampire Clay is clumsily structured and paced, with the gross-out effects dashed off at the beginning and the laboured explanation effectively defusing the tension just at the point when it should be building into a claypocalypse of gore and violence. An extended final sequence, in which the clay is rehydrated once again, leaves open the possibility for a sequel.