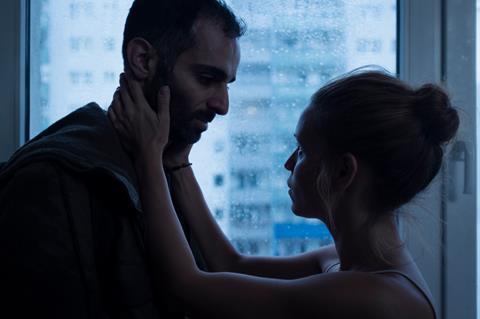 The cost of exile is acutely felt in Whispers Of War, writer/director Florian Hoffmann’s drama focusing on a Kurdish man who has settled in Berlin. Raw archival footage of conflict in his homeland is woven into a fictional tale that forces the man to reconnect with his past and question who he has become. The personal and the political are carefully balanced in a measured, thoroughly absorbing drama that should attract festival interest.

Khalil Ozen (Hadi Khanjanpour) has fully embraced his new life in Berlin. He works as a primary school teacher and has a German girlfriend, Leyla (Kristin Suckow), employed by a television news agency. One fellow refugee concludes, “You’re more German than a tax declaration.” Khanjanpour’s sensitive performance paints Khalil as a decent, kindly man who is encouraging to his young pupils and devoted to the memory of his late sister who was shot dead alongside their parents.

Things change when Leyla asks him if he will watch some footage from Cizre in eastern Turkey. He can help with translation and perhaps verify it is genuine. But images from home depicting conflict and oppression have a more profound impact on Khalil than he had imagined. He hears voices and spots something that convinces him he has seen his sister.

The hunger to discover more prompts an existential crisis in which Khalil grows increasingly aware of his position as an outsider in his adopted land. His instinct is to help spread word of the forgotten conflict between the Turkish regime and the Kurdish minority. One of the recurring, underpinning themes of the film questions the priorities of a cynical western media. Who decides what is news and deserves coverage becomes an issue as Khalil and Leyla find themselves fighting a television age driven by sensation and ratings. Nobody ever says the words “if it bleeds, it leads” but that seems to be a guiding principle for Leyla’s bosses. The duo are competing with the death of a polar bear at the Berlin Zoo and the latest postings of Selena Gomez to try and secure some space for their story.

Hoffmann plausibly increases the pressure on Khalil to take action and prove his worth to his homeland. He also depicts the way the tensions within Khalil are reflected on the streets of Berlin and even in his own classroom. Proud Kurdish pupil Melda (an adorable, scene-stealing Melda Kanbak) is frequently a target of unthinking prejudice from some classmates.

In the film’s latter stages, the story veers slightly towards melodrama, but Hoffmann mostly keeps things grounded in realism, from the school setting to the Kurdish Cultural Centre that increasingly draws Khalil. Hamid (Aziz Capkurt) from the Centre is the one who offers Khalil hope that he might be able to make contact with his sister, but there are strings attached. “If you do something for us, we’ll do something for you,” he is told.

Cinematographer Carmen Treichl lends the film a noirish look, especially in night-time scenes with Khalil in the gloom of his flat. Alone with his thoughts, he looks out a window to the surrounding fortress of other apartments and other lives, his face illuminated by the glow of his phone.

That low-key quest for realism provides an ideal setting in which to place the video footage from activists in eastern Turkey. A closing credit reveals that the video footage is from 2015 and 2016. We are able to witness protests and defiance in the face of curfews imposed and restrictions on daily lives, which include the lack of running water or electricity. The sound of elevated breathing from the phone owner, the noise of gunfire, tear gas skimming across a street, rocket attacks, and the sense of someone risking their life to inform the world all add weight to the film. This enhances rather than detracts from conveying the pressures on Khalil and effectively brings home why all of this matters so much in terms of who he is and what he left behind.