Jealousy and bitterness accompany a Kurdish shepherd as he follows his wife to Belgium. 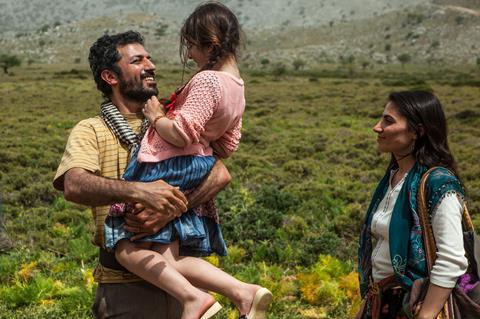 The familiar demons of tradition, familial influence and good old-fashioned jealousy conspire to bring down an essentially good – though rather lost – main in Sahim Omar Kalifa’s debut film Zagros, which follows the increasingly dark story of a Kurdish shepherd who follows his wife to Belgium but cannot leave the weight of his old life behind him.

While at heart a relatively straightforward drama, the film does smartly deal with the conditions faced by women in Kurdistan.

The film, which won the Grand Prix for Best Film at Film Fest Gent – the first Flemish film to win the award since the festival was founded – feels familiar in its depiction of tortured masculinity in the form of a man who simply cannot learn to trust the woman that he loves, but is delivered in an astutely made drama driven by impressive lead performances and tinged by an overwhelming sense of sadness.

The film opens in bucolic fashion as shepherd Zagros (Feyyaz Duman) tends his herd up in the hills with his dog Mr Spock and is visited by his pregnant wife Havin (Halima Ilter) and their young daughter Rayhan (Daria Hachem Mohamed Gulli). But back in their village local gossips are spreading rumours that she has been having an affair with local salesman Ali, and after she is struck by a family member and his father Abdollah, a village elder, tries to put her under house arrest, she runs away into the hills to join her guerrilla fighter sister Eliz (Elvan Kocer).

She decides to head to Belgium to stay with a cousin, and while Zagros tries to continue with his rural life he realises he needs her, and makes his way to Belgium illegally after his father refuses to give him his passport. But when reunited he finds that old suspicions and jealousies emerge, and he starts to suspect Havin and her cousin Dara (Suat Usta) may be involved.

Just when it seems they may find a way to have peace, his father arrives in Brussels and reignites Zagros’s suspicions, even claiming that Ali is the father of his daughter. Matters take a dark turn when Zagros, returning from work at an abattoir, spots Dara and Havin hugging in the street.

Though he loves his wife on his terms, Zagros just cannot leave behind the weight of suspicion and the bitter rumours spread by his family. While at heart a relatively straightforward drama, the film does smartly deal with the conditions faced by women in Kurdistan, Halima Ilter especially striking as put-upon Havin.