Soul Boys Of The Western World 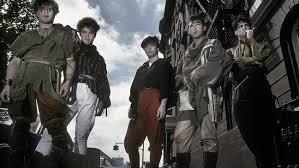 Spandau Ballet’s New Romantic rise to 1990s musical glory is wonderfully told in George Hencken’s debut documentary Soul Boys Of The Western World, an absorbing and insightful delve into how the band defined the post-punk - and consciously flamboyant UK - music scene and went on to be an international phenomenon. Like so many such stories, it is also a tale of music, sex, drugs, booze, recriminations and an eventual parting-of-the-ways, and while the film treads sensitively over certain areas it also succeeds wonderfully in charting the band’s rise to stardom.

The film covers pretty much every aspect of the band’s journey, and while it spends little time on the court case (though at least it doesn’t try to hide it) the highlights are very much their performances.

Quite how five working class Islington (an area of North London) boys with a love for soul music made their way into the big time is the heart of the film. Just missing out in the punk scene, they entered music via cult London nightclubs such as Blitz and Billy’s, just as fashion and music started merging and punk attire morphed into jodhpurs, faux pirate wear and boots and make-up and quiffs took over from spiky hair and bondage tartan.

The film, which premiered at SXSW, charts the band’s tentative journey into the music scene with charm – and makes great use of archival footage, photos, cuttings and reminiscence – and should be an easy sell to territories where the band are still successful as well as being an easy fit into more festivals.

The film is structured in a quite familiar and traditional style, charting the early days of juggling initial band members; the failed early gigs; where the name came from (journalist Robert Elms apparently saw it scrawled on a Berlin bathroom wall), and how they finally had their big break

Their enthusiasm for the glam excesses of the Blitz Club – which celebrated the likes of David Bowie, Roxy Music and the emerging electronic bands such as Kraftwerk) - saw them making good music and also ride the crest of burgeoning pop video world. In the 1980s British bands such as Spandau Ballet, Soft Cell, Culture Club, Human League, ABC, Ultravox and - their biggest rivals, Duran Duran – helped define a new music trend.

Their hits were plentiful, but life on the road – and its accompanying excesses – took its toll, and when the Kemp brothers took a sideways journey into acting, playing the notorious gangland Kray brothers in the 1990 film The Krays, the writing was on the wall. The band dissolved that year, but recriminations later kicked in through a bitter lawsuit over royalties in 1999 though the dust eventually settle and the band staged a reunion a decade later.

The film covers pretty much every aspect of the band’s journey, and while it spends little time on the court case (though at least it doesn’t try to hide it) the highlights are very much their performances; those early forays into the world of music video, and – best of all – losing to Duran Duran in a battle of the bands on BBC’s Pop Quiz programme.