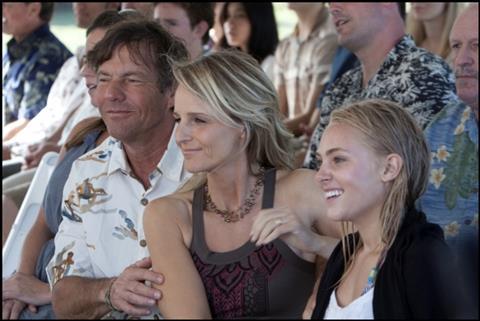 Hokey but sweet, Soul Surfer tells the real life story tells the real-life story of teenage Hawaiian wave rider and shark attack victim Bethany Hamilton. With its impressive surfing footage and inspirational message it has ingredients that could appeal to several demographics – families, female teens, surfers and the faith-based audience – though there’s also a danger it might fall through the cracks between those groups.

Dennis Quaid and Helen Hunt give the film some needed dramatic weight.

The indie production’s commercial prospects are certainly best in the US, where FilmDistrict and Sony’s TriStar are releasing on April 8, with Sony’s Affirm Films handling the Christian audience marketing. The subject matter and tone will be a tougher sell in the international marketplace, where independents are distributing in some markets and Sony in others.

Talented amateur surfer Hamilton was thirteen when she lost her left arm in a 2003 shark attack off the picturesque Hawaiian island of Kauai. But, as recounted in her teen-targeted Soul Surfer book, she confounded expectations and got back on her board, eventually becoming a successful professional surfer.

Co-written by Baywatch executive producer Douglas Schwartz and scripter Deborah Schwartz, the film recreates the attack and then spins out the story of how Bethany (engagingly played by AnnaSophia Robb, from Race to Witch Mountain) returns to surfing. The inclusion of a life changing church-organised trip to help victims of the Indian Ocean tsunami gives the tale dramatic shape but feels a little clumsy.

The Hamilton family’s Christianity is woven fairly subtly into the story and the film’s creation of a mean spirited rival for Bethany sets up an efficiently rousing sport movie-style climax with some beautiful Hawaiian surfing footage (for which the real Hamilton did much of the surfing).