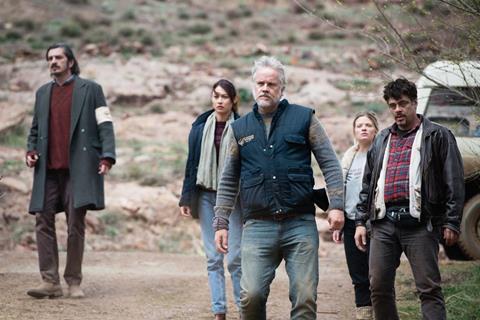 Mired in crisis for the past few years, Spanish cinema has had better news to celebrate recently.

Although the market share for local productions looks set to drop from 25% in 2014 to 20% in 2015 (it is at 12% for the first nine months of the year, with several major releases to come in the next three months), cinema attendance has grown by 4% despite the highest VAT rate on cinema tickets in Europe (21%).

The figures were revealed by Ramon Colom, president of the association of Spanish producers FAPAE, during a press conference at the San Sebastián Film Festival, where 60 Spanish films are being shown, one third of them in the main sections.

While the market share for Spanish film currently sits at 12%, Joxé Portela, vice-president of FAPAE, pointed out that “the last four months of the year are usually the strongest for Spanish films. Last week, we had 40% of the box office and two weekends ago it was 50%”. Local success for Enrique Gato’s Capture The Flag, Javier Ruiz Caldera’s Anacleto and Fernando Leon de Aranoa’s A Perfect Day - all released since late August - are already improving the numbers.

Thus far in 2015, the highest-grossing local films have been a comedy about Spanish migrants in Berlin, Perdiendo El Norte, with 1.6 million admissions; Ahora O Nunca, a romantic comedy featuring Spanish superstars Dani Rovira and Maria Valverde, at 1.4 million admissions; and Gato’s animated feature Capture The Flag, which has 1.1 million admissions so far and is still in the top ten.

The picture isn’t all bright. While the five-year slide in the annual number of new productions has been arrested, they remain stagnant: 114 new films started production in the first nine months of 2015, almost the same as in 2014. Of these feature projects, 52 are documentaries, 59 narrative features and three animations. Eighteen are co-productions, mainly with France or Argentina, and 52% cost under 1 million Euros.

“We don’t want to be too optimistic or euphoric because we still face great problems,” said Colom at the press conference. “Last year there was this assumption that figures were good because of the huge success of Spanish Affair but we are sure that there is a change in the perception of the audience. Spanish people see local films as great entertainment.”

Colom had harsh words for the Cannes Film Festival for “ignoring” Spanish cinema. “We are making not only great entertainment but also high-quality films,” he said. “There is this problem with Cannes. Sometimes we regret not being there but I think we should see it the other way round: they should be ashamed of what they are doing with our cinema. It’s incredible our absence in the Official Selection. It’s the biggest festival and market in the world and we should question whether it’s mainly for the benefit of their friends.”

FAPAE has just signed a new agreement with the Spanish government that changes the rules of cinema funds (it substitutes the old recoveries, given after the release of the films, for new anticipated funds and Colom urged authorities to “make it work as soon as possible”.

With the arrival of Netflix due in October, Colom also urged the government to put more energy into fighting piracy. “It’s time to have a cinema law that covers every aspect, not only funding. We have this idea that production is the king of the audiovisual world and distribution is the queen. In this new digital era, we all have this need to find new rules that we don’t have.”