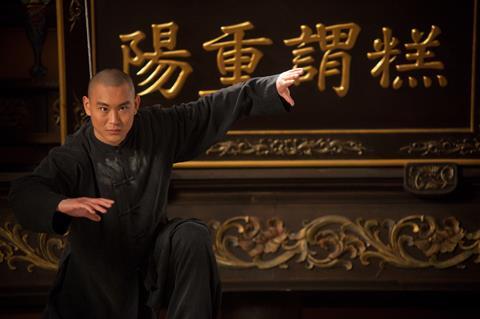 Picking up immediately where Tai Chi Zero has left off, the second instalment of Hong Kong actor-director Stephen Fung’s steampunk martial arts trilogy shows an encouraging restraint in its stylistic approach and finds a much shaper focus on its storytelling.

Hero is a rather more absorbing period actioner that culminates in an impressive showdown fight.

When taken together, the first two films of the trilogy is provisionally an origin story of real-life tai chi legend Yang Luchan (played by Wushu champion Yuan Xiaochao as an idiot in Zero), and practically a straightforward action comedy in which its simpleminded hero earns both lucidity for his mind and refinement of his uncontrollable talent for the martial arts.

After heroically halting the plan of a western railroad company to tear down the Chen village – renowned for its Chen-style kung fu, which is forbidden for outsiders – Luchan is married (conveniently) to master Chen Changxing’s (Tony Leung Ka-fai) daughter, Yuniang (Angelababy), as a last-gasp effort to save the young man from the unforgiving elders, who firmly believe in a long-standing myth that the clan will be obliterated once their martial arts are learned by anyone outside.

The prophecy is established in a brief flashback sequence, featuring cameos by Patrick Tse (in heavy makeup) as a former master and Daniel Wu (in heavier makeup) as a formidable Buddhist monk. It’s a notable piece of trivia that the Tai Chi movies are the first titles of the recently established production company Diversion Pictures, which Wu and Fung co-founded.

The mayhem then follows in the shape of a revenge plot by Zero’s villain, Fang Zijing (Eddie Peng), who’s here teaming up with Peter Stormare’s Duke Fleming of East India Company in another attempt to tear down the village, using Luchan’s background in the anti-Qing dynasty Divine Truth Cult as an excuse.

In a minor reversal in theme from that of the first movie, which awkwardly treats western modernity as a source of chaos, Hero also sees the return of master Chen’s science-obsessed eldest son, Zaiyang (Feng Shaofeng), who was abandoned by his father as an adolescent but comes back eventually to save the day with his own mechanical inventions.

While Zero may turn off some viewers with its frivolous script, repetitive use of onscreen texts and an exhaustingly hyperactive visual scheme that might find a better home in comic book fantasies, Hero is a rather more absorbing period actioner that culminates in an impressive showdown fight between our hero and a kung fu master (played by the esteemed action choreographer Yuen Biao) – and, thank goodness, not another giant machine.

The good news, in other words, is that Tai Chi Hero finally ends up what a proper martial arts film should be; the bad news – at least for those who just want to see a good fight between two normal humans – is that the planned last chapter of the trilogy looks all set to take a dramatic turn into sci-fi drivel, with a post-credits trailer hinting at a mysterious organisation of biologically-enhanced humans.