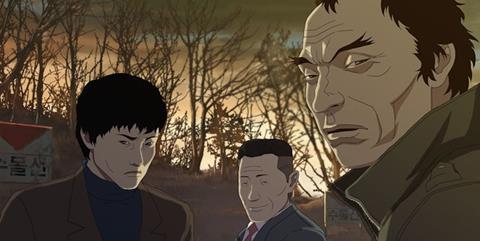 Yeon Sango-ho’s strikingly dark and violent follow-up to his pioneering South Korean animation The King Of Pigs(2011) is a similarly bleak and harrowing tale and confirms his reputation for making pure and uncompromising animation for grown-ups, again focusing on an unlikely subject for animation.

The Fake is a dark, dour and depressing film and while challenging and thought provoking it is never fun.

The Fake (Saibi), which premiered at the Toronto International Film Festival and also screened at the Busan Film Festival, takes an often harrowing look at how religion can be manipulated to control the desperate or the innocent, focusing in on a small South Korean town set to be flooded due to a hydro dam project, with the church – in the form of a new pastor named Sung – offering help to the confused locals, naturally in exchange for their life savings.

The film also features one of the most unlikely of anti-heroes. A brutal, thieving, drunken and violent man who abuses his wife and daughter but a man who goes up against the wrongdoing of this evangelical new church just to prove a point, not for any moral or ethical reason.

Min-chul arrives back at his home and casually steals the money his daughter, Kim Young-sun has been saving for her college education and promptly drunkenly blows it gambling. After getting into a fight with suave but violent businessman Choi – who happens to be behind the church/cult that sees him picked up by police. He sees the man’s picture on a wanted board as a known con man, and sets out to track the man…simply to prove he is right, not out of any desire to help the locals.

His determination to track down the businessman posing as a church elder sees him caught up in organised crime, his wife ruined and his daughter killed, but when he finally sees the cult ruined his response is simply to shout out “I was right. I was right. They’re all fakes!”

Despite his innately evil nature Min-chul veers on the accidentally heroic at times, but his sheer selfish unpleasantness makes him a supremely vile and shocking lead character. The Fake is a dark, dour and depressing film and while challenging and thought provoking it is never fun. It is a finely crafted and absorbing film that as with The King Of Pigs offers a stark and tough insight into modern South Korea.