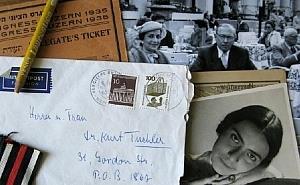 A deceptively modest personal chronicle develops into a remarkably astute, multi-layered documentary, tackling heavyweight themes without ever abandoning its initial simple, unobtrusive and intimate tone. Since his previous documentary The Komediant (2000), Arnon Goldfinger has been biding his time looking for the right subject and when his 98 years old grandmother Gerda, died five years ago, he believed a nice little home movie about the family coming together to empty her flat would put him back on the track.

The result turns out to be not only a perceptive history lesson but also a touching and sometimes humorous experience.

But once past the first waves of nostalgia, Goldfinger found himself engaged in a long and tortuous journey leading all the way to Berlin and Wuppertal in Germany, facing aspects of the Holocaust, from perspective that have been rarely probed into before, on film. Goldfinger, a painstaking researcher, often accompanied, though not always very enthusiastically by his mother Hannah, found were both surprised and eventually shocked by evidence they unearthed, relating not only to the past of their family but reflecting an entire generation as well. The Flat (HaDirah), which premiered at the Jerusalem Film Festival, is a surefire festival hit with solid chances of crossing over into theatrical distribution.

Gerda and Kurt Tuchler were among those sturdy, strong-minded German Jews who immigrated to Palestine in the late thirties (in their case, 1936) but when she died, many years after her husband, and after 70 years in Tel Aviv, her flat could, for all purposes, have still been in Berlin, so imbued was it with everything German in it.

Among the piles of publications, newspapers, letters and photo albums, carefully stashed away in boxes, a past comes alive that grandmother Gerda obviously didn’t always share with her daughter Hannah, who, as she willingly concedes herself, was never curious enough to ask the right questions at the right time.

Rummaging among these papers, Goldfinger finds out his grandparents accompanied a Baron von Mildenstein and his wife on a trip to Palestine. Records of that trip are found in a series of articles in the notorious Nazi publication Der Angriff (The Attack), under the title “A Nazi in Palestina”.  The Tuchlers went on exchanging letters with the von Mildensteins long after they left Germany and moved to Tel Aviv, but amazingly, this intense communication went on not only before but also after WW2. All this despite von Mildenstein’s war record that gained considerable notoriety when Adolf Eichmann testified at his trial that one of his predecessors developing the Jewish Final Solution was that same Baron von Mildenstein.

How is it possible? It is a case of denial on both sides, explains Prof. Michael Wildt, when interviewed by Goldfinger. Kurt and Gerda couldn’t accept, despite everything they knew and all the parents they lost in the Holocaust, not being part of the Germany they never stopped believing is their real home.

As for the Mildensteins, the Tuchlers were Jews but also personal friends, the Final Solution would certainly have to be applied to them as well, but in the meantime, they shared the same kind of education, culture and tastes and there was no reason not to enjoy their friendship for the time being.

When contacted, Mildenstein’s daughter, Edda, living now in Wuppertal, is more than willing to cooperate with Goldfinger on his film but insists her father had nothing to do with the Nazi regime, and no amount of documents, including such that are written in his own hand, will not change her opinion.

The final meeting between Edda and Goldfinger’s mother, who comes with him to Wuppertal, reveals another set of denials. Edda von Mildenstein won’t accept the past, while Hannah Goldfinger starts only now to actually look at it, for until her son started prying into the family’s closets, the Holocaust was a gigantic Black Hole she preferred not to approach. As succinctly put by Gerda Tackler’s closest friend, Gertrude Kino, this was the plight of the entire second post-Holocaust generation but luckily, there is a third generation now, demanding to know more.

Goldfinger, assisted by two very perceptive cameramen who always manage to catch the right reaction shots, keeps throughout a quiet, restrained demeanor, systematically following the evidence wherever it leads and allowing it to speak for itself. Thanks to the presence of his mother, Hannah - almost unwilling to accompany him but gradually caught up until she becomes part of it - the result turns out to be not only a perceptive history lesson but also a touching and sometimes humorous experience.