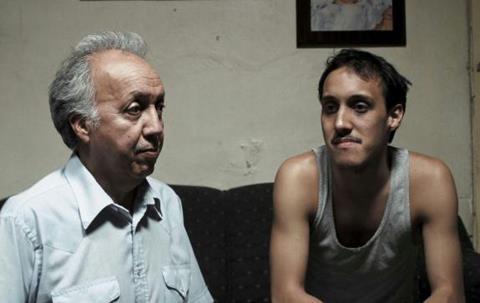 Bound to be admired by some and reviled by others, Nicolas Pereda’s ambitious - some may say even pretentious - filmmaking approach of fixed camera set-ups, hyper-realistic dialogues and broken narrative may get him support from many film critics and art house bookers but for non-specialied audiences his film will be a hard nut to crack.

Shades of other young Mexican directors such as Reygadas, Embke, Escalante and others creep in here and there.

Using a schematic plot (if that is what the film’s backbone is supposed to be) a subliminal sense of humour that doesn’t always work and actors trained by Pereda for minimal response, The Greatest Hits (Los Mejores Temas) is the perfect test for festival audience endurance, but going beyond it will be a tough assignment for its sales agent. The film premiered at the Locarno Film Festival.

Emilio (Jose Rodriguez) returns after a 15 years absence to his wife (Teresa Sanchez, a regular in Pereda’s films) and his 28 year-old son from a previous marriage, Gabino (Gabino Rodriguez, another Pereda veteran), who makes a living of sorts selling Greatest Hits CDs in the subway. In his absence, the pair had forged for themselves a placid co-existence and, though bitter and resentful, they hardly know how to respond to Emilio’s renewed presence in their modest home.  When they finally decide to kick him out, they discover he’s chosen to leave of his own free will.

Or so it seems. Because at this point, the filmmaker intervenes, switches genres and starts interviewing his characters - a kind of reminder of his own presence on the set. Then the actor playing Emilio is replaced by someone who is purported to be the real father (but who in reality is Pereda’s own uncle, not an actor). In his new personification Daddy is no longer so keen on leaving.

Some of the information about the reasons for his original departure, about his relationship with Gabino’s real mother and other details from the past take on new shape. Some of the scenes are repeated with variations, which include the specific scams he tries to lure his son in, but when he finally does leave, it is Gabino who goes out to look for him, to shoot the breeze together for a couple of days in a flat looking very much like an improvised warehouse.

Mostly a theoretical exploration of such topics as the difference between the reaction of actors to other actors and the changed relationship once real life inserts itself into the fiction they’re performing, the film seems hardly concerned with dramatic structure or character study. Pereda prefers to capture only the ripples on the surface of their relationships, inviting the audience to use its imagination for what might happen at a deeper level.

The father’s rambling in the last part of the film, when, after fancying himself as a former architect and sculptor, he tells his son that” art is good for nothing” suggests there are all sorts of interpretations that could be attached to this film. Some of them are pretty obvious (like the exaggerated affection of the son for his stepmother whom he keeps fondling at every excuse), others, like the list of titles on Gabino’s CDs, become a constantly repeated mantra subtly integrated into the film’s dialogue, as a sort of commentary on the conduct of the various characters.

Shades of other young Mexican directors such as Reygadas, Embke, Escalante and others creep in here and there. Performances are intentionally bland and low-key, but there are rare exceptions, such as the moment when Teresa literally lets down her hair and breaks out crying in the shower. Lighting is sometimes obvious by its absence (the last scene is entirely backlit, turning the faces of the two protagonists into black splotches) and the soundtrack can at times be significant – the recoding of war sounds – or puzzling, like Bach’s Goldberg Variations used as a bridge between scenes.