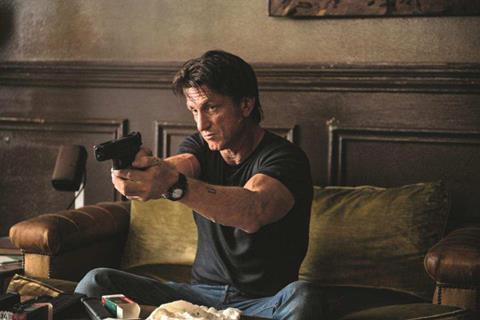 Sean Penn takes an unconcealed knife at a slice of the $900m (and counting) Taken market in The Gunman, Silver Pictures’ ageing-assassin drama which totters unsteadily across Africa and Europe before grinding to a gory halt in a Spanish bullring.

A muddled bid for political relevance has led the film-makers to drag on The Gunman’s primary mission: to entertain.

Director Pierre Morel launched the Taken franchise, and has been enthusiastically co-opted into The Gunman by star/co-writer/producer Sean Penn – a force of nature indeed, with his glistening, bulging biceps propelling the action at every turn.

With a plot rooted in the Congo (which coincidentally boasts great surf for a 54-year-old former mercenary to gratuitously display his pecs), The Gunman ticks all the genre boxes for being macho, violent, and tough-guy-talent-laden (Javier Bardem, Idris Elba and Ray Winstone appear, alongside, interestingly, Mark Rylance, straight from the Tudor success of TV’s Wolf Hall).

But it’s also leisurely, unfocused, and a little too indulgent of its star. With a tighter grip, The Gunman could have held its theatrical demographic to a lengthy ransom, but will probably look to good opening weekend returns in all markets followed by healthy VOD instead.

The Gunman has loftier aims than Taken; its plotting is more modern-day Le Carre as it sets up a gang of former special forces operatives who provide security cover for an NGO in the Congo (the screenplay is taken from a novel by French author Jean-Patrick Manchette). Jim Terrier (Penn), Felix (Bardem) and Cox (Rylance) are really mercenaries who work for a shadowy mining company, however, and Jim is the “designated trigger” for a hit on the Congo’s Minister of Mining, with disastrous effects for the DRC which is plunged into civil war and genocide.

Jim is forced to leave the country, abandoning his hot doctor girlfriend Annie (Italian actress Trinca from The Son’s Room) without a word. Eight years later, his sins have come back to haunt him, and Jim goes on the run in an attempt to find out who is trying to kill him and his fellow operatives. Complicating matters is the fact that Jim is suffering from – a cheerfully non-fatal – case of brain damage which obliges him to lurch around woozily at key moments.

This is a highly male affair: Jim Terrier and his friends and colleagues (including his pal Stanley, played by Winstone) are all former special ops lads. Jim is in better shape than the others - a fact the film can’t seem to stop stressing - but the issue of where to put “the girl” in middle of this testosterone binge is never properly worked out. Initially, Annie is a bossy surgeon in the Congo. Next up, she’s hanging around a Barcelona pre-school and visiting an adoption agency longingly. Later she’s “always riding with her horses” and being told ominously “you’d better get in the shower”. It’s almost a relief when she gets to fulfill her destiny as a kidnap victim.

Similarly, Interpol agent Idris Elba has scanty scenes filled with hilarious dialogue about a “tree house” in which a metaphor is stretched as tight as Penn’s jeans; Bardem is a scene-stealing drunk; Winstone a diamond geezer; and Rylance is at least a new face to an old role. Locations are suitably seductive, with South Africa subbing for the Congo and attractive location work across London, Gibraltar and Spain, particularly Barcelona (which outlawed bullfighting in 2012, so won’t be pleased with the final sequence).

Much like Taken or, before it, any Bruce Willis hostage drama, a film like The Gunman doesn’t need to be entirely logical. It also doesn’t matter that the hero is a little rusty for these physical miracles of villain-crunching (at 54, Penn is a mere whippersnapper to Liam Neeson’s 63, though). But The Gunman does have a genre obligation to move quickly, before the viewer can sense it’s mortally wounded. A muddled bid for political relevance has led the film-makers to drag on The Gunman’s primary mission: to entertain.