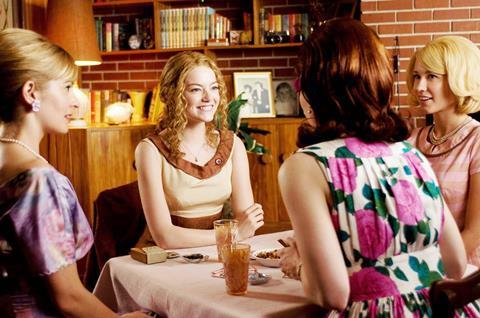 Aimed at loyal chick lit fans and the often receptive audience for inspirational drama, The Help is anicely cast but otherwise pedestrian adaptation of Kathryn Stockett’s best-selling 2009 novel about blackmaids and their white employers in the American South of the early sixties.

Writer-director Tate Taylor allows the film to meander through a lot of scenes that, while sometimes touching or funny, often feel incidental.

Fans of the book will provide the DreamWorks/Participant film version with a mostly older and female core audience when the movie opens wide in North America on August 10. But worldwide distributor Disney may find it harder to attract other demographics.

The subject matter won’t help internationally, though there should be at least some interest in the several dozen territories in which the novel has been published.

While the novel was narrated by three characters, the film focusses on two women from each side of the racial divide in a civil rights era Mississippi town: stoical housekeeper Aibileen (Doubt’s Viola Davis), sassy cook Minny (Octavia Spencer, from Seven Pounds), idealistic would-be writer Skeeter (Easy A lead Emma Stone) and racist society hostess Hilly (Bryce Dallas Howard, from The Twilight Saga: Eclipse). The main plot has Skeeter secretly gathering stories about the cruel working lives of Aibileen, Minny and other maids, tales that, when published, incur the wrath of villainess Hilly but liberate the long-suffering Aibileen.

Perhaps trying a bit too hard to respect the source material, writer-director Tate Taylor (a lifelong friend of novelist Hackett whose only previous feature is indie outing Pretty Ugly People) allows the film to meander through a lot of scenes that, while sometimes touching or funny, often feel incidental. The upshot is a lack of dramatic momentum and an unjustified two-and-a-half hour running time.

The performances are a mixed bag, with Davis and The Tree of Life’s Jessica Chastain (playing a white social misfit who hires and befriends Minny) standing out. The strong supporting cast includes Allison Janney, Cicely Tyson and Sissy Spacek.