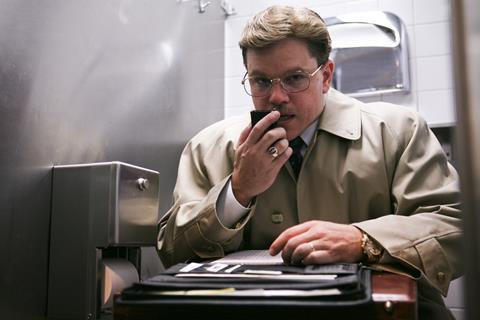 The true story of Mark Whitacre, a top-level executive at an Illinois agriculture giant who turns whistle blower to the FBI over a global price-fixing scam, is turned into an uneven semi-comedy by Steven Soderbergh. Far more serious than either the broad trailer campaign or the exclamation mark in its title would indicate, the film can’t quite decide its tone, and a razzle-dazzle comedy score from Marvin Hamlisch – his first movie music since 1996 – doesn’t help settle the matter, especially since the best moments are intensely dramatic.

For no apparent reason bearing in mind the story and the period, Soderbergh chooses to dress The Informant! up as a Peter Sellers-style sixties comedy

Too clever by half for mainstream audiences,The Informant! will certainly do some business - and an energetic performance by Matt Damon as Whitacre can’t hurt its prospects – but it is unlikely to last throughout awards season after its US opening on Sept 18. After the box office disappointment of other corporate-themed films like Duplicity and The International, The Informant! isn’t about to buck a trend.

The Whitacre story is one of those real life sagas which is almost too crazy to believe, which iis a problem for the film. At least the first half of the running time documents the two-and-a-half years spent by Whitacre and his FBI handlers gathering enough evidence to indict the top brass at Archer Daniels Midland  (ADM) – think Soderbergh’s own Erin Brockovich or The Insider – but then the story takes an extraordinary turn when our hero is revealed to be both a pathological liar and a crook. Audience allegiance to and affection for the character is essentially destroyed, and the film-makers themselves are of course complicit in that switch, leaving us in the dark as to Whitacre’s motives and how much his wife knew.

Playing out of competition at the Venice Film Festival this week, the film is a companion piece of sorts to Michael Moore’s Capitalism: A Love Story, a damning indictment of corporate greed in today’s America.

In this instance ADM is fixing prices on the production of animal feed additive lysine and conning consumers out of tens of millions of dollars.

The film starts in 1992 as corporate rising star Whitacre announces to his bosses there may be a mole feeding information about ADM’s dropping profits to a Japanese competitor. The company brings in the FBI to tape Whitacre’s conversations with the Japanese and when FBI agent Brian Shepard is installing the tap, Witacre’s wife Ginger (Lynskey) urges him to reveal all about the price-fixing scam.

So begins the investigation into ADM’s practices during which Whitacre wore a wire and taped over 200 meetings, implicating numerous major players.

But when the FBI finally moves in and alerts ADM to its activities, Whitacre’s sideline in embezzlement is inevitably revealed.

Damon, who dons a moustache and put on some pounds for the role, is always entertaining even while Burns’ script doesn’t ever delve too deeply into how his mind works. There’s some fine supporting work from Bakula, the ever-reliable Lynskey and countless bit players. It’s refreshing to see a cast not filled with famous faces, lending a certain authenticity to the middle-American setting.

For no apparent reason bearing in mind the story and the period, Soderbergh chooses to dress The Informant! up as a Peter Sellers-style sixties comedy, from the psychedelic title cards to the Hamlisch music, all clearly intended to distract from the visual drabness of the office furniture and besuited men in virtually every scene. The creative choices here are so startlingly out of sync with much of the drama that it feels like a decision made in the editing room to “funny up” the movie. Perhaps played straight, it would have come off as the darkly humorous and sadly ironic character piece it should be.

Screenplay, Scott Z Burns, based on the book by Kurt Eichenwald