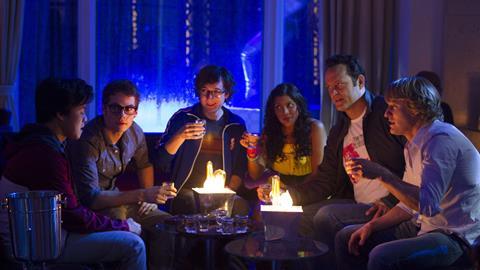 Eight years after their US smash Wedding Crashers, Vince Vaughn and Owen Wilson re-team for The Internship, a softer and less effective comedy that plays - with some corporate help from Google - on the digital divide between gens X and Y. While the setup promises cross-generational appeal, the execution may make it hard for this amiable but pretty bland outing to draw any demographic in really big numbers.

The comedy comes when Vaughn and Wilson get chances to launch into the kind of fast-talking schtick they honed in Wedding Crashers.

Worldwide distributor Fox will be looking to leverage the Vaughn-Wilson pairing when it opens the Regency Enterprises production in North America on June 7. The star pairing and the genre might prove less sellable during the film’s international rollout later this summer.

Vaughn (who also co-wrote the script and produces) and Wilson play a couple of salesmen whose careers have been derailed by the advent of the digital age. After talking their way into coveted summer internships at Google, the guys have to pit their wits against a horde of brilliant and tech-savvy college kids competing, in what one describes as “a mental Hunger Games,” for a handful of job slots at the internet search giant (whose real life campus provided the film with its settings).

Other characters in the mix include a stern supervisor played by Aasif Mandvi (from Margin Call), a youthful villain played by Brit Max Minghella (The Social Network) and a driven executive played by Australia’s Rose Byrne (Bridesmaids). John Goodman and Will Ferrell do fun cameos.

As directed by Shawn Levy (who previously steered Night At The Museum and its sequel), the film meanders agreeably enough through its predictable plot but takes a bit too much time out for facile life lessons and admiring depictions of Google’s corporate culture.

The comedy - producing mostly chuckles rather than big laughs - comes when Vaughn and Wilson get chances to launch into the kind of fast-talking schtick they honed in Wedding Crashers.