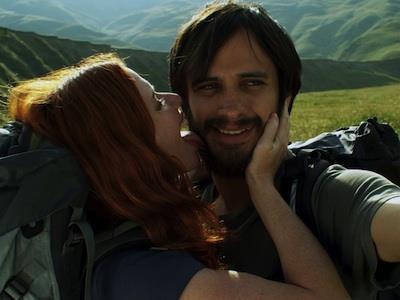 Julia Loktev follows up her prize-winning 2006 debut Day Night Day Night with a haunting three-hander set in the sprawling Caucasus Mountains of Georgia. Initially a simple portrait of the playful interactions between a young couple and their guide as they hike through the wilderness, The Loneliest Planet evolves into a riveting drama pregnant with high stakes emotion and profound themes. Courtesy of Loktev and her three superb actors, it’s one of those minimalist films which rewards audience investment with food for thought aplenty.

It’s a film which hinges on a moment, a moment that raises questions of betrayal, trust, gender roles, loneliness and the gulf between first world and developing countries.

A world premiere in competition at Locarno, next booked to play in the Visions section at Toronto, the film could easily become a must-see for the arty twentysomething crowd, especially those in the west who have experience of far-flung travel. Potential distributors will have good reviews and the hook of lead actor Gael Garcia Bernal to work with, but inventive marketing teams should also be able to stir up press and audience interest in the subtler perils of backpacking in foreign climes.

Bernal and Israeli actress Hani Furstenberg play Alex and Nica, a couple from the US in their early thirties travelling through Georgia in the summer before their winter wedding. They hire a local guide Dato (Gujabidze) to take them on a long trek through the mountains, walking by day and camping at night. As they walk, Alex tests Nica on the declension of Spanish verbs (he is of Mexican origin, we discover) and they get to know Dato, sharing his lethal local liquor, playing games and telling each other jokes.

Such a fragile tale of unspoken turmoil demands authentic characterisations and naturalistic behaviour, and Loktev, as she demonstrated in her first fictional feature, has a real skill at realising them. At 113 minutes, the film is not fast-paced but the final 30 minutes is all the more powerful for the slow, beguiling build-up.

It’s a film which hinges on a moment, a moment that raises questions of betrayal, trust, gender roles, loneliness and the gulf between first world and developing countries. As each of the three walks away silently from the incident into the barren and ambivalent landscapes of Georgia, Loktev unlocks a maelstrom of feeling which belies the apparently peaceful resolution of the situation.

The director is served well by her cast: Bernal and striking redhead Furstenberg are unaffected and convincing as the tourists, while Georgian mountaineer Gujabidze, acting for the first time, almost steals the show as Dato, a quiet man who has his own troubled story to tell.