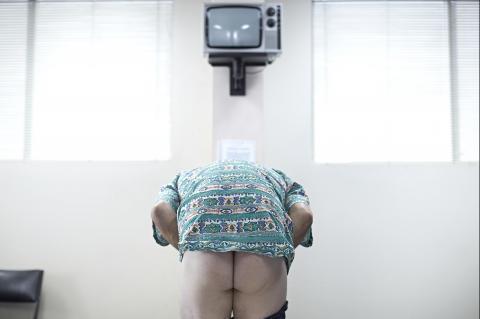 A darkly amusing Australian comedy that deftly dwells on some of the more unpleasant physical side effects of being a drug smuggler, The Mule is an enjoyably mix of crime and dark laughs, littered with strong performances. With an impressive sense of time and location it is an oddball trip based on a real life story.

At heart The Mule is a nicely staged period crime story – there are killings and beatings aplenty – but its genially tasteless dark humour gives it a real edge.

Co-directed by Tony Mahony and Angus Sampson (who also plays the lead role), it is the tale of a simple man who makes a series of wrong decisions and finds himself caught in a terrible situation…and has to try and defy his own bodily functions.

In 1983 in Sunshine, Victoria, in Australia, genial and naïve but rather slow-witted Ray Jenkins (Sampson) foolishly agrees to act as a drug mule for his friend Gavin Ellis (Leigh Whannell, actor and writer of Saw and Cooties), who is acting as a front man for local mobster Pat (John Noble, from TV’s Fringe).

In Bangkok, Gavin convinces him to swallow all of the drug capsules, but on return to Australia Ray panics at customs and finds himself held by police. Detectives John Croft (Hugo Weaving) and Les Paris (Ewen Leslie) take him to a local airport hotel – legally they can hold him for seven days without charging, and they simply plan to wait and let nature take its course.

But Ray is determined to hold out, becoming a ‘human time-bomb’ as he tries to defy his bodily functions and somehow keep the capsules inside his body. His legal aid representative Jasmine Griffiths (Georgina Haig) wants to try and help, but corrupt cops and local gangsters are also after the contents of Ray’s stomach and will stop at nothing to get their hands on the drugs.

At heart The Mule is a nicely staged period crime story – there are killings and beatings aplenty – but its genially tasteless dark humour gives it a real edge. This is clear even in the opening prologue scene as Ray bends over for a cavity search and the male and female customs officers play ‘stone, scissor, paper’ to decide who gets to take a look. Hugo Weaving especially has a fine time as a tough cop who will do almost anything to get a result, while Aussie veteran actress Noni Hazelhurst is impressive as Ray’s tough-but-tender mother.

As the days pass by the cops check on past records on how long a suspect has held out (10 days is apparently the record), and comment bluntly: “Never had a mule refuse to shit before”. There are a few ‘yuck’ moments – especially when Ray does evacuate the capsules into the middle of the night, but sifts through his excreta and speedily re-swallows the capsules.

Angus Sampson (who starred in Insidious and Insidious: Chapter 2) is great as the naïve but grimly determined Ray – a foolish man rather than a criminal - with his mission to keep his bodily functions at bay oddly honourable.