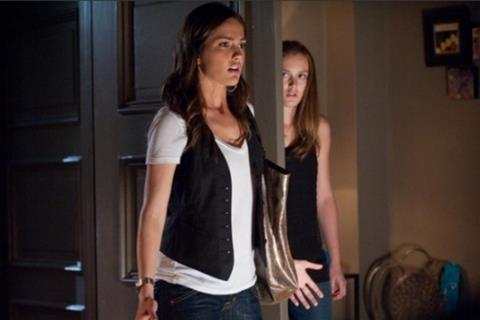 A poorly directed and even more inadequately imagined exercise in genre calisthenics, The Roommate wanly goes through the motions of the psychological thriller playbook, but never manages to raise an eyebrow, let alone a pulse.

Danish-born director Christian E. Christiansen, in his American debut, fails to imprint any sense of escalating doom or dark consequence onto the story.

An attractive young cast, simply pitched conceit and streamlined marketing efforts will turn out modest adolescent audiences for opening weekend, but poor word-of-mouth (the film did not screen in advance for critics) and limited demographic appeal will consign The Roommate fairly quickly to justifiably anonymous life as cable TV filler.

Small town would-be fashion design student Sara Matthews (Minka Kelly) arrives in Los Angeles wide-eyed and naïve. It’s not long before she has a new boyfriend, frat boy Stephen (Cam Gigandet), plus a job and sense of settled purpose. Rebecca Evans (Leighton Meester) is possessive of her roommate Sara, though, and resentful of her other new friends, including party-happy Tracy (Aly Michalka).

Rebecca starts taking secret steps to bond the pair closer. After an awkward and revelatory Thanksgiving trip home with Rebecca, Sara tries to distance herself, but Rebecca spins violently out of control.

The Roommate lacks narrative imagination throughout, but meanders and dawdles in curious ways, at one point pretending to care a bit about the specifics of Rebecca’s mental diagnosis before abandoning that narrative strand entirely.

The script is furthermore saddled with an absolutely terrible set-up of characters, a fact all the more baffling given debut screenwriter Sonny Mallhi’s decade of hands-on story experience as vice president of production for Vertigo Entertainment. Irene (Danneel Harris) is established as Sara’s mentor, but her introduction is so slapdash that one is never sure why or how she even knows Sara.

An aborted seduction scene between Irene and Rebecca, along with a couple other strange edits, seems to indicate post-production snips to secure a PG-13 rating, but The Roommate’s problems run much deeper, to core misguided story choices. Other small but important details, like the dingy use of a fake social media site and fictitious Los Angeles academic setting, only serve to highlight and reinforce feelings of the movie’s complete separation from reality.

Danish-born director Christian E. Christiansen, in his American debut, fails to imprint any sense of escalating doom or dark consequence onto the story. He and cinematographer Phil Parmet also craft a stark, highly mannered and patently false visual scheme, completely at odds with any dorm room or apartment.

Kelly and Meester are certainly easy on the eyes, and photographed as such. To that end, they mostly escape harsh judgment here. Gigandet, meanwhile, is all squinty posing and hair gel, a ridiculous, irritating and implausible love interest.