The Sorcerer And The White Snake 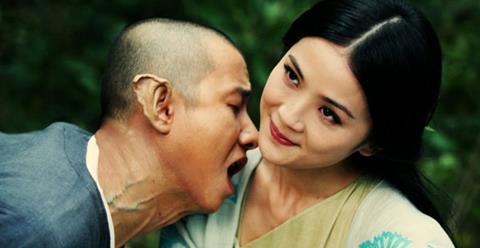 Breathtaking, beautiful and engagingly bonkers, this super-sleek Chinese fantasy romp is brimming with strange and oddly wonderful moments, and despite its inability to make much sense it is a real guilty pleasure of a film. Brimming with kinetic action scenes and sumptuous visuals The Sorcerer And The White Snake is one for fans of this unique genre, but will also bemuse and possibly bore those not willing to go with the flow.

In this fantasy world, legend has it that goblins and monsters live in the primeval forest, and it is the job of Fa Hai (Jet Li), a sorcerer form Jinsham Temple, to travel the world to subdue demons and slay monsters.

One day young herbalist Xu Zian (Raymond Lam) is collecting herbs high in the mountains, where he is observed by two snake demons – sisters in fact, top half all woman and bottom half all snake, but who can turn themselves into either species if they wish – who enjoy a playful and carefree life. White Snake (Eva Hunag) takes a shine to Xu Zian, and when he falls into a lake she save him with an underwater kiss.

With the help of her sister, Green Snake (Charlene Choi), she contrives to meet Xu Zian again in human form at the local Lantern Festival, but their marriage is not looked upon favourably by Fa Hai, who is not big on human-monster relationships, and the scene is set for a showdown between Hai and his brother monks and then two snake demons, with a bemused and confused Xu Zian caught in the middle.

The film, which opens September 29 in China, looks great and even when you think there might be a quiet moment it tend favour erupting into strange and always colourful action. The cute talking animals hint that this could be aimed at the younger market locally, but there is enough bold fantasy moments to appeal to fans of this unique genre.

Jet Li is now something of an older statesman of the fantasy/action film genre, but he still has the presence and poise to carry the film, and in amidst the effects mayhem he is a solid and reassuring figure in the pretty much indestructible monk/sorcerer as well as still having the moves when necessary

Perhaps best of all, though, is Shanghai-born actress Eva Huang, perhaps best known for her lead role in Stephen Chow’s Kung Fu Hustle. She is a feisty, fun and charming presence, and oddly convincing as the female/snake monster who falls deeply in love with a hunky herbalist…now there’s a role to pep up any CV.