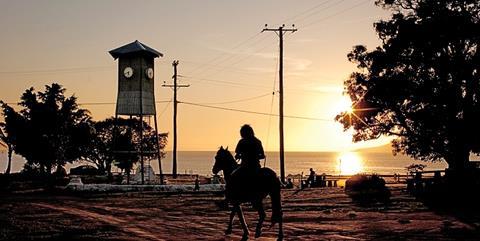 In Tony Krawitz’s documentary, The Tall Man, a policeman gets away with murder. Krawitz exhumes a well-known Australian scandal to dissect that country’s racial politics.

A soft urgent throb of music leads us through testimony.

It’s tough going. The Australian Thin White Line about police brutality is relentlessly grim to watch.  Australia, where the killing was the subject of an award-winning book, is a natural market.  Interest from festivals and television in the English-language doc could also be high in the US and Canada, where indigenous issues are part of the political debate.

The Tall Man is likely to find a niche at doc festivals worldwide. Its rigorous ethnography could also put it on the museum circuit.

The title refers to Chris Hurley, a police sergeant who arrests an aboriginal, Cameron Doomadgee, for swearing, in November 2009. The prisoner was dead 40 minutes later, with his liver cleaved in two. Hurley, more than 2 meters tall (6 foot 8) claimed that he fell on the man while grappling with him.  Skeptical investigators reopened the case, which went back and forth in the courts as police and locals on Palm Island vented their anger publicly. Details of Cameron’s death remain a mystery, as the film ponders why a jury ultimately lets Hurley go free.

The death of Cameron remains a cause célèbre in Australia. Krawitz’s film, a sobre revisiting rather than a reinvestigation, assembles the story through conversations with lawyers and journalists, and with aboriginals on Palm Island, a place where “troublesome” natives were sent in the early twentieth century.

Archival footage and stills show a site of staggering natural beauty where natives lived in a state of occupation and quasi-confinement. Police interviewed in news footage speak of their authority in seigniorial terms. Law enforcement officers declined to be interviewed by Krawitz, making the film’s point that they supported Hurley rather than pursuing any serious fact-finding.

Krawitz’s doc adds nuances to that picture, examining the everyday violence among aboriginals on Palm Island – spouse abuse, drunken brawling, and an alarming suicide rate. Chris Hurley also emerges as a more complicated figure than campaigners against him allege, with aboriginal friends and a history of charity work. Yet previous complaints against the giant cop (including one made by Doomadgee’s niece), inadmissible in court, show him to be capable of crushing brutality.

If The Tall Man is haunted by the death of Cameron Doomadgee, it is also haunted by the influence of the doc filmmaker Errol Morris. A soft urgent throb of music leads us through testimony that that adds weight to the evidence of Hurley’s violence on the day of the arrest while advancing inevitably to his acquittal – facts which have been reported extensively in Australia.

Yet Krawitz’s dirge about an unpunished crime breaks away from the Morris template with its close observation of idyllic and violent Palm Island, where race, even in the 21st century, is still destiny.