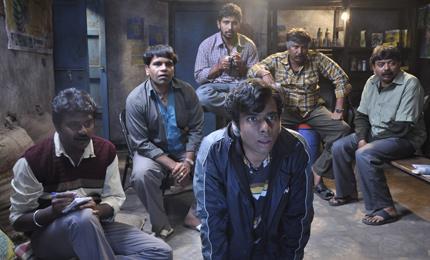 The comic situations in the film are thoroughly entertaining.

The Marathi language film, which received a Hubert Bals award at last year’s NFDC Film Bazaar, can expect strong reviews and a healthy festival career over the coming year. Kulkarni’s previous films The Wild Bull (2008) and The Well (2009) both screened at Berlin.

The story gets underway when a simple herdsman named Kesha, following after his cow, has a vision of the god Shri Guru Dutta. Rushing off to tell the other members of his underdeveloped village, he is initially met with ridicule and disbelief from all but his mother.

However as time passes, the villagers begin to interpret various auspicious events in relation to Kesha’s vision. When marks appear on the tree where Kesha witnessed the deity (in reality, we see they are made by a passing repairman), the village is fully convinced.

A local journalist, who has been writing about Kesha’s vision, suggests building a temple on the spot, and several politically ambitious locals get behind the project. Soon, thanks to wide publicity, pilgrims from far and wide begin to visit the temple and economic forces quickly transform the town.

Kulkarni excels at handling the large ensemble cast of characters, who make up a bewildering array of egos and idiosyncrasies. He is also skilled at capturing the dislocating speed of the village’s transformation, by creating a highly distinctive rhythm through editing, verbal timing and the occasional use of music.

The comic situations in the film are thoroughly entertaining, but they also raise issues related to economic development, corruption, and religious belief. To his credit, Kulkarni never drives these points home, but leaves the audience to tease them out on their own. The film screened at the Busan International Film Festival.