The World Of Kanako 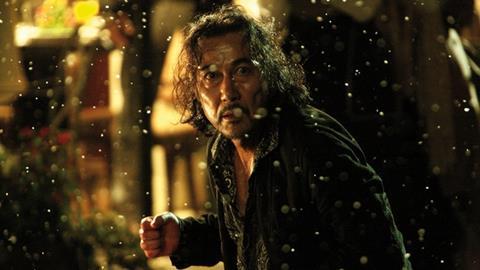 Proving he is one of the most provocative Japanese directors around, talented Tetsuya Nakashima pulls out all of the punches with his sublimely violent The World Of Kanako, a complex and impressively twisted tale of troubled man who heads off on a dark journey when he finds out how little he knows about his estranged daughter.

Beautifully and brutally shot and blessed with striking performances, The World Of Kanako is a memorably bleak film, but rather compulsive in Fujishima’s descent into his own personal hell.

It is a brutal and bloody film to be sure, but an oddly watchable and compelling one all the same, and after a series of festival screenings could well see savvy buyers – especially ones who may have handled the like of Old Boy or similar genre fare – interested. Nakashima’s filmmaking pedigree means that it demands attention, and while a difficult film to watch it is still made with zest and real skill.

In a directing trajectory that has seen him veer from Kamikaze Girls and Memories Of Matsuko through to the more challenging and acclaimed Confessions (which took the Oscar for Best Foreign Language film), Nakashima has clearly been heading into darker and darker territory, and in adapting Akio Fukamachi’s nihilistic novel he has hit new – and again very different – peaks. Driven by powerful performance by Koji Yakusho (playing antithesis from his charming lead in Shall We Dance?) and young Nana Komatsu, the film is tough journey…but always a smart and challenging one.

Alcoholic former cop but now a convenience store guard, Yakusho’s Fujishima is roped back into a murder investigation linked to a triple murder, with sly cop Asai deciding the boozy Fujishima makes for a likely murder suspect. Meanwhile, Fujishima’s worried ex-wife (Asuka Kurosawa) gets in touch and asks him to try and find their 17 year-old daughter Kanako (Nana Komatsu), who has gone missing.

Sporting a white suit that gets more and more blood spattered as the film goes on, he turns his detective powers onto tracking his daughter, finding out to his horror that she is not the pure young thing he thought she was and was using drugs. Convinced she has been led down a sleazy path by other teens he gets brutal in his investigation, but soon it transpires she is the one who manipulates those around her.

To say that Fujishima is an anti-hero is something of an understatement…to a degrees he is a man driven mad – in many senses – by the revelations, with his refusal accept the truth balance by Kanako unrepentant attitude. The fact that Kanako is a rather empty vessel with no moral compass is hard to take, but it is balanced to a degree by her father’s almost wild anger. But that is the point of the story – not that there should be a hugging-and-crying happy ending, but that she is very much her father’s daughter.

Beautifully and brutally shot and blessed with striking performances, The World Of Kanako is a memorably bleak film, but rather compulsive in Fujishima’s descent into his own personal hell. But then Tetsuya Nakashima is a clever and inventive filmmaker offering up something challenging and edgy, if perhaps never palatable or comfortable.