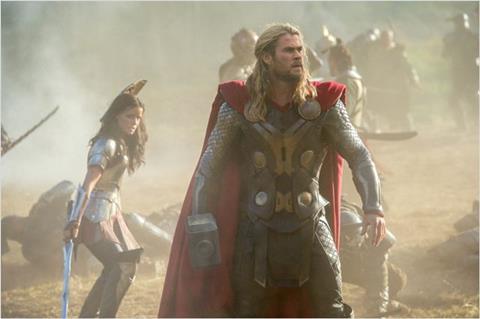 Superhero sequel Thor: The Dark World is a gloriously entertaining film that delivers spectacle, action, a daft elf villain, some smart 3D moments and – most importantly – a whole lot of fun as it weaves its tale of derring-do on various worlds, before ending up back on Earth for a no-holds barred action climax. Entering a marketplace bereft of mainstream superhero antics and likely to still coast on the good-will around other recent Marvel hits (both on film and television) it should likely dominate the box office for a goodly chunk of time.

The delightful moments of genuine humour, though, are what give the film its edge and quality.

It is to the credit of director Alan Taylor and an strikingly strong bunch of actors – who take it all appropriately seriously but also make the most of some very amusing moments – that Thor: The Dark World delivers some epic entertainment. Yes it may all be rather familiar – dark villain plans to unleash a universe destroying weapon – but the film moves at a brisk pace and weaves God and Earthlings together beautifully. Of all of the Marvel franchises Thor always felt the most difficult to pull off (he is a virtually indestructible God after all) but here it all ties together rather well.

The film had its world premiere in the UK and opens in that territory and other international spots on October 30, prior to a US release on November 8. Its shrewd formula of action, effects and humour – refined so well in Iron Man 3 and Avengers Assemble – should see it have a strong run into the Christmas period.

Only a modest chunk of the film is set in Earth this time, with the majority of the drama and action taking place in Asgard (as well as a few other fantasy realms), as compared to Kenneth Branagh’s original Thor, which deposited the Norse God on Earth for most of its second half and lost its momentum and sense of excitement. This time round the special effects are there for the action as much as the sweeping fantasy worlds, with Chris Hemsworth having really grown into the role and delivering a nicely nuanced performance…as well as a resolutely muscular one.

A prologue details an ancient battle between the Dark Elves and the heroic Asgardians, led by Odin’s father, for control of a deadly force called the ‘Aether’ (luckily we know it is spelled with an ‘A’ because the Elves only speak in subtitled Elvish), with the Asgardian’s foiling a plan to detonate the Aether and leaving the Dark Elves’ leader Malekith (a heavily made-up though still distinctive Christopher Eccleston) to escape to a centuries-long slumber and the Aether buried in a distant and well hidden location.

Centuries later and while Thor is busy restoring peace up in Asgard and the nine realms, his lady love Jane Foster (a nicely feisty Natalie Portman) is searching for her hammer-throwing hunk in London and somehow (in a rather haphazardly plotted and rather clunky sequence) accidentally becomes the host for the Aether, which causes Malekith to wake and make her something of a living weapon while on Earth.

Up in Asgard she is tended by doctors and taken under the wing of Odin’s wife Frigga (a nicely developed role for Rene Russo, who had little to do in the original), but at the same time draws an attack by Malekith and his Elvish hordes. With Asgard devastated, Thor is forced to release his evil half-brother Loki (the excellent Tom Hiddleston, whose performance has been a highlight of the two Thor films as well as Avengers Assemble) and try and a way to stop Malekith from destroying the worlds.

The sequences back on Earth are defined by a more playful sense of humour than the more serious goings-on in Asgard, with Kat Dennings as Jane’s assistant Darcy using her trademark hilarious withering line delivery to good effect, and Stellan Skarsgard as Jane’s boss Dr Erik Selvig going off the deep-end with his character’s naked prance around Stonehenge. Naturally enough, though, they end up helping to save the day as the Dark Elves arrive in Greenwich in London (landing right in the middle of the Royal Naval College) to try and activate the full deadly force of the Aether.

The film all fits together rather nicely. Asgard is beautifully imagined and costumed and Thor: The Dark World really hits its stride when it comes to Thor and Loki realising that they will have to work together to try and get the better of Malekith. Their characters slightly bend and waver as they dwell on the bond between them (and it also leads to one delightful moment with a cameo from Chris Evans as Captain America as Loki transforms himself briefly into the Star-spangled crusader to wonderfully sarcastic effect) and naturally there are twists a-plenty as they go to battle.

The delightful moments of genuine humour, though, are what give the film its edge and quality. From Thor politely hanging up his hammer on a coat hook when he walks into Selvig’s flat through to him having to take the underground from Charing Cross back to Greenwich mid-battle (though in a clear mistake he is told it is only three stops to Greenwich, when any Londoner knows it is far more) the humour balances the action and keeps it from being yet another monotonous superhero romp.

There are two teasers hidden in the credits just to keep fans rooted to their seats – one of which features a blond-haired Benicio Del Toro as the Collector, to be seen in Guardians Of The Galaxy - which simply helps reinforce the sheer consistency of regular output from the Marvel superhero production line. Next, in fact, will be Captain America: The Winter Soldier, followed by Guardians in 2014 and The Avengers: Age of Ultron in 2015.