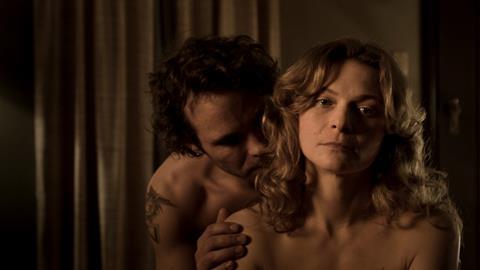 Touch is a compelling, cryptic movie that should ideally be seen without any idea what to expect. Of course critics, bloggers and publicists will stand in the way, so knowing nothing might be an impossible ask. Even studiously avoiding spoilers, as this reviewer hopes to do, will no doubt drive savvy readers to fill in the gaps.

Canny viewers will pick up scattered clues before the protracted coda clears up all remaining questions.

Not so much a whodunit as a whodunwhatandwhy, Christopher Houghton’s debut Aussie feature, premiered at the Sydney Film Festival, has style and mystery, regular shocks and some rough, explicit sex. A 2015 local arthouse release is the plan but meanwhile international festivals should be keen.

Some — or nothing — of the following synopsis might be true. Dawn (Leeanna Walsman) brutally attacks her father (possibly) and escapes with her young daughter (maybe) Steph (Onor Nottle) in the boot of her car, soon pursued by handsome, determined private eye (perhaps) John (Matt Day). Hiding in a Bates-like off-road motel, Dawn has unbridled, full-frontal sessions with unkempt local cop Nick (Greg Hatton) while Dawn sleeps nearby and John closes in.

What is not in doubt is the quality and commitment of the actors lead by Walsman, who runs the full gamut from contentment to frantic desperation with never a false step. 12-year-old Nottle is a remarkable find as Steph, luminous and moving under Houghton’s assured direction.

Shot in the scenic Adelaide Hills, cinematographer Aaron Gully does widescreen wonders on a tight $A500,000 ($470,000) budget. The editing of David Banbury adds much to the movie’s jigsaw-puzzle mystery. Composer Kyls Burtland’s nicely restrained score is pitch perfect.

Canny viewers will pick up scattered clues before the protracted coda clears up all remaining questions. The problem for the promoters of Touch will be to keep a lid on its mysteries. Even knowing there’s to be a twist or two could spoil the impact of this taut, grownup thriller.