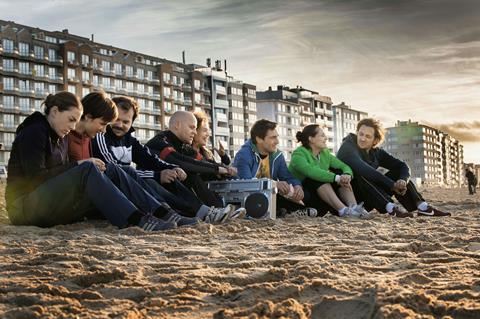 As a self-aware and astutely manipulative tearjerker, Christian Zübert’s Tour De Force (Hin und Weg) presses all of the right emotional buttons as it combines the ‘incurable disease’ and ‘road trip’ genres to good effect but without coming up with anything original or insightful. The performances are all engaging and it is nicely shot though some of the plot devices don’t always convince.

Tour De Force knows just what it is doing the whole way through – delivering a series of tearjerker moments with precision, and as an emotional tragic comedy it certainly succeeds.

Set to be released in Germany via Majestic Filmverleih in October, the film had its world premiere at the Locarno Film Festival, the film will likely receive a good local reception. Though not so likely in Belgium, which is ‘jokingly’ dismissed as the home of Tintin, The Smurfs, chocolate, French Fries, Jean-Claude Van Damme and the ideal place for assisted suicide…hardly the best tourist board advert.

Director Christian Zübert (who made the comedy Three Quarter Moon) is aiming for a blend of tragic comedy with Tour De Force, and certainly the story – a very familiar one – of old friends heading of for their annual get together but rocked to find that one of their number has a terminal illness, ticks all of the right boxes when it comes to old-fashioned movie emotional manipulation. Of course when done well these sort of films can be big hits, but they also need an edge…or at least something new to help give the momentum.

It is the turn of Hannes (Florian David Fitz) and wife Kiki (Julia Koschitz) to decide on the destination of the annual cycling trip they have with their closest friends. To the group’s bemusement Hannes announces that they will be going to Belgium (cue the familiar Belgium gags), but it is only when they stop off at his mother’s house that he tells them that they are going to Ostend, in Belgium, because he has an incurable disease and can have an assisted death there.

Naturally the scene is set for a variety of different emotional responses from his friends – from anger to tears – as they eventually decide to carry on with their road trip. The gang – bald-headed lothario Michael (Jürgen Vogel); bickering married couple Dominik (Johannes Allmayer) and Mareike (Victoria Mayer); Hannes’s brother Finn (Volker Bruch) and free-spirited Sabine (Miriam Stein), who hooks up with Michael during the journey – all do their best to bond and have as much fun as possible as Hannes heads towards the end of his life.

Part of the humour comes from the gang’s annual gimmick of giving one another ‘dares’ which they have to fulfill during the trip, which range from amusing (one of he guys dressing as a woman) to tacky (one being involved with a gang-bang), though a scene where they romp in the mud – with a telegraphed music score – feels over-played, obvious and unconvincing.

The film is at its strongest towards the closing scenes when they arrive in Ostend and are joined by Hannes’ mother (veteran performer Hannelore Elsner). The performances are all good, though Julia Koschitz makes a strong impression as Hannes’ stoical wife barely keeping her emotions in check and Jürgen Vogel has some fun as the unreconstructed ladies man who meets his match in the flighty Sabine.

When the screen goes to black after the final scene you sort of hope Christian Zübert won’t go for the add-on ‘one year later’ coda…but he (or rather the script) can’t resist that well-used cliché. Tour De Force knows just what it is doing the whole way through – delivering a series of tearjerker moments with precision, and as an emotional tragic comedy it certainly succeeds.