UKTI’s presence at Hong Kong’s Filmart 2016 is helping the UK film industry make the most of the opportunities emerging from Asia. 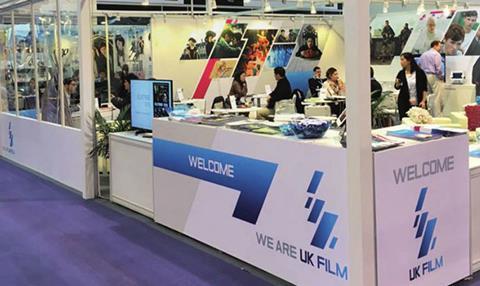 The UK’s creative industries are central to the country’s economic growth. The UK film industry generated a turnover of $9bn (£6.4bn) in 2014, directly contributing $4bn (£2.8bn) to the country’s GDP and exporting almost $2bn (£1.4bn) of services.

In the same year the global theatrical market hit a new record, and was worth just over $36bn. UK films represented 12.9% of the global market, grossing $4.7bn at the worldwide box office.

The health of the UK film industry looks set to continue, with tax relief, solid infrastructure and world-class talent across all sectors enticing a huge number of major international projects to the UK, such as the rebooted Star Wars franchise (in 2015, inward production investment in the UK generated a spend of $1.7bn [£1.18bn]). At the same time, an increasing amount of UK film and high-end TV content is being sold to multiple international territories.

The UK government is dedicated to supporting this continuing global success. UK Trade & Investment (UKTI) is the government department offering practical help to UK companies doing business around the world, and supporting the UK’s creative industries at a wide variety of international festivals and events, including Cannes, Berlin, Toronto, AFM — and now Hong Kong’ Filmart.

With China poised to overtake the US as the world’s largest film market, both in terms of box-office revenue and number of screens, not to mention the increasingly voracious appetite of Eastern audiences for high-end UK TV drama, the region is a crucial growth market, and Filmart is an essential event.

The UK FILM Centre umbrella stand, supported by UKTI alongside Film Export UK and the BFI, has been a regular fixture of the UK pavilion since 2005. It is there to help UK attendees make the most of the opportunities offered by Filmart.

“In the last decade, Filmart as a sales market has grown in importance dramatically in the last two years,” says Charlie Bloye, chief executive at Film Export UK. “The cause of the growth is not any single territory. Buyers from the Gulf to Australia attend, many of whom have not made the trip to Berlin in the previous month.

“There has also been a steady rise in attendance by UK film professionals, such as producers and financiers, looking for co-production opportunities, and distributors and festival programmers mining the rich vein of Asian films introduced at the market.”

Bloye points out the value of the market is growing in line with increasing Asian appetite for UK product. “UK films are made in almost all genres, so many find their niches to a greater or lesser extent in Asian territories,” he says. “Even when the subject matter may not be a bullseye for local tastes, the technical quality and creative talent on display are persuasive to distributors and audiences. There is a growing appetite for all forms of entertainment in the region, and we are competing for the public’s attention against films from other countries, TV, games and social media.”

Attendance at Filmart has, therefore, become vital for UK companies and individuals looking to mine its rich seam of opportunity.

“Film is an important part of the success of the UK’s creative and media sector, and the global landscape for independent films is very competitive at the moment,” says Bloye. “It’s not just about opening up new markets, it’s also about retaining the appeal of our films with existing audiences in established markets. We rely on the targeted support from UKTI to help us maintain and build on success.”