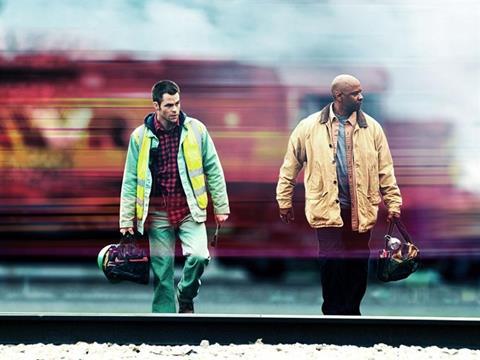 Using cameras that swoop and dodge around, over and under the relentless locomotives, Scott and editors Chris Lebenzon and Robert Duffy do a terrific job conveying size, weight and speed.

Like Scott and Washington’s four previous collaborations (the latest being last year’s subway train remake The Taking of Pelham 123) the Fox worldwide release should do good if maybe not spectacular business when it opens in the US on November 12. And like the team’s last two joint efforts (Pelham and 2006’s Deja Vu), it could do better in the international marketplace, where the rollout begins the same weekend.

Setting up a topical hard times backdrop, Washington’s Frank is a veteran train driver assigned to work with Pine’s new boy conductor Will. While the two railroaders are sizing each other up on their first assignment shunting freight along the tracks of Pennsylvania, another train, a gleaming red locomotive hauling a load of dangerous chemicals, gets loose without a driver. Picking up speed, the runaway becomes a threat not just to Frank and Will’s train but to everyone else on the tracks and to the inhabitants of a city where the rails take a dangerous turn.

The story has its fair share of secondary characters - most prominent among them a harried railroad controller played by Rosario Dawson from Seven Pounds - and it takes some time to go into Frank and Will’s troubled domestic lives. Pine (star of last year’s Star Trek reboot) doesn’t get a lot to work with but Washington fits beautifully into his latest role as an understated action hero.

After a slow build-up of tension, though, the focus is mostly on the train action. Using cameras that swoop and dodge around, over and under the relentless locomotives, Scott and editors Chris Lebenzon and Robert Duffy do a terrific job conveying size, weight and speed. No expense appears to have been spared on the use – and destruction – of helicopters and police cars.