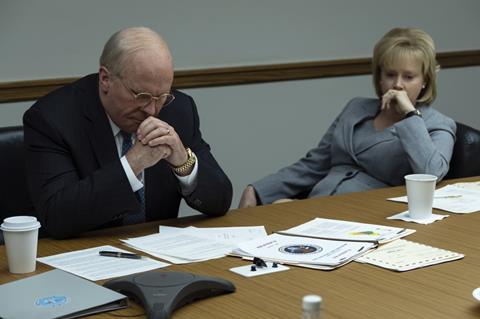 There’s anger but no insight in Vice, a glib portrait of Dick Cheney that preaches to the choir but becomes less persuasive as it goes along. Christian Bale convincingly plays the former US Vice President, nailing his squinty eyes, terse delivery and hunched-over essence, but writer-director Adam McKay squanders the effort on an unfocused, self-satisfied satire. As a recap of the 9/11 attacks and the build-up to the invasion of Iraq, this comedy-drama feels familiar. And as a takedown of Cheney’s inner circle — including George W. Bush and Donald Rumsfeld — the movie rarely draws blood but seems proud of itself anyway.

Vice fails to give us a compelling Cheney

Annapurna will release Vice in the States on December 25, hoping to become a major Oscar contender. With a cast that includes Amy Adams, Steve Carell and Sam Rockwell, the film should entice liberal viewers who abhorred the Bush administration, but others (especially in territories outside the US) may find little reason to engage. The verdict of Cheney and his former colleagues, all still living, has yet to be heard.

McKay, who won a Best Adapted Screenplay Oscar (alongside Charles Randolph) for his 2015 film The Big Short, returns to that movie’s mad-as-hell tone, presenting us with an overview of Dick Cheney’s (Bale) life over 50 years. Encouraged by his ambitious wife Lynne (Adams), he stops drinking and pulls himself together, moving from Wyoming to Washington, D.C. to become a congressional intern and eventually befriending Republican insider Donald Rumsfeld (Carell), who takes Cheney under his wing.

Like The Big Short, Vice has a clever, slick stylishness as McKay jumps between time periods and sometimes provides background information and historical context. (For example, viewers unfamiliar with the unitary executive theory — and why it’s important to Cheney’s story — will get a crash course thanks to an occasional onscreen narrator played by Jesse Plemons.)

But whereas McKay’s previous movie had a clear sense of its peculiar characters and a cleansing anger toward their unethical behaviour, Vice fails to give us a compelling Cheney. An opening disclaimer acknowledges that Vice is based on a person who is intensely guarded, making it difficult to offer definitive glimpses into his motivations. But while Bale has put on weight for the role and been made up to look like the vice president, McKay’s screenplay falters when it tries to decode Cheney’s inner life, settling for a vague theory that he’s a brilliant, diabolical schemer. Relying on smug, sometimes petty jokes that breeze through the highs and lows of his career, Vice doesn’t adequately wrestle with the unprecedented power Cheney brought to the vice presidency and the consequences of his policies, especially as they pertained to the ruinous Iraq War.

Much of Vice suffers from the same problem, peddling lazy political clichés and liberal grievances as informed satire. Rockwell portrays George W. Bush as a backslapping mental lightweight, and although it’s amusing, it’s not a well-defined character. Likewise, Carell’s Rumsfeld is a cartoonish jerk, while Adams gives us a generically cold-hearted Lynne Cheney.

Not that Vice hasn’t been made with gusto and technical skill. Beautifully shot by Greig Fraser, affectingly scored by Nicholas Britell and briskly edited by Hank Corwin, Vice sports a confident irreverence which is paired with a mournful grandeur meant to convey the tragedy of this man’s callous actions. But McKay’s stabs at gravitas don’t have much sting. (A ponderous motif involving Cheney’s love of fishing feels especially forced.) Even when Vice introduces well-known aspects of Cheney’s public life — his heart troubles, his gay daughter Mary (Alison Pill) — the movie doesn’t have anything particularly inventive or witty to say, instead restlessly moving on to condemn easy scapegoats including reality television and blockbuster movies as symptoms of a collapsing America.

A closing epilogue lays out sobering facts about the number of Iraq War casualties, making plain that McKay’s attack on Cheney is connected to that military debacle and its legacy of “enhanced interrogation” and Guantanamo Bay. But the filmmaker gets bogged down in too many tangents — including digressions where he mocks the conventions of political biopics — to mount a damning argument against his ripe target. Many like McKay who were critical of the Iraq War despise that Dick Cheney got away scot-free after all the devastation he caused. But for all its hyperactive energy and spot-on impressions, Vice doesn’t really lay a hand on him.