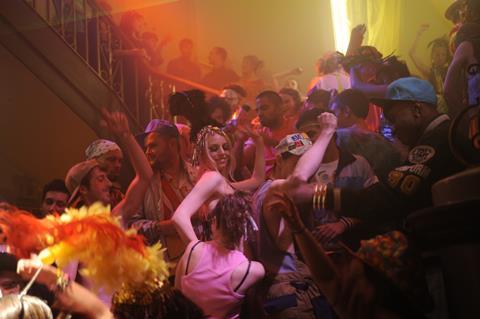 Promising performances and energetic direction are the saving graces of Weekender, an otherwise unremarkable tale of two innocents abroad in the rave scene of the 1990s.

The film has a certain swagger and restlessness that maintains the initial interest.

Careful marketing to an audience nostalgic for their lost youth or a younger demographic in search of undemanding home grown fare might secure some interest for UK distributor Momentum who release the film in September following a world premiere at the Edinburgh Film Festival.

The lack of a distinctive flavour or original take on the events will mean an uphill struggle for a film with similarities to Human Traffic, 24 Hour Party People, SoulBoy and many other British titles.

In the Manchester of 1990, best friends Matt (Henry Lloyd-Hughes) and Dylan (Jack O’Connell) are small time crooks who stumble into a lucrative sideline organising raves in warehouses and factories abandoned in the aftermath of Britain’s industrial decline.

The mood sours from giddy excitement to growing danger as gangsters and drug dealers muscle in on the act and the friendship is tested to breaking point.

Director Karl (Pelican Blood) Golden adopts a style of restless camerawork, fast cutting and skewed angles that mirrors the delirious spirit of the times. The film has a certain swagger and restlessness that maintains the initial interest.

Jack O’Connell is believable as the guileless, soft-centred Dylan whilst Henry Lloyd-Hughes is compelling as his more wary, thoughtful compatriot Matt. The predictable dramatic arc of the narrative and the lack of any real sense of tension combine to leave Weekender floundering and feeling like just another overly familiar morality tale.