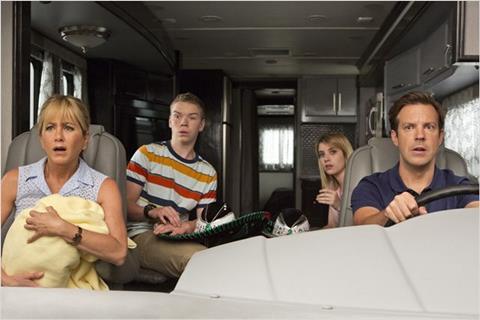 More fun as a red band trailer than as a feature, We’re The Millers scatters a handful of raucously funny scenes across nearly two hours of softer family themed comedy. While the mix of tones might pull in a broader crowd, it might also confuse audiences initially attracted by the edgy advance publicity and a re-teaming of Horrible Bosses stars Jennifer Aniston and Jason Sudeikis.

As she did in Horrible Bosses, Aniston trades - though a bit less effectively this time - on the novelty of a TV sweetheart going raunchy.

The Warner-distributed New Line production opens in North America on August 7, getting a jump on a crowded summer weekend. Horrible Bosses, another R-rated New Line comedy, opened on the same weekend in 2011, but with stiffer competition Millers may struggle to match its predecessor’s $118m domestic gross. Like Bosses, which took $92m internationally, Millers might produce a smaller take outside the US.

The teams behind Wedding Crashers and Hot Tub Time Machine wrote the script, which introduces David (Saturday Night Live’s Sudeikis) as a successful but emotionally unfulfilled small-time pot dealer. When he gets in trouble with his supplier (The Hangover’s Ed Helms), David agrees to smuggle a big load from Mexico to the US.

The drug run leads to a series of misadventures, capably orchestrated by director Rawson Marshall Thurber (Dodgeball: A True Underdog Story). The running joke/moral is that the fake family of misfits begins to act like a real family, but that conceit soon gets tired.

The incidental comedy comes when the phony family members revert to streetwise type, though the raunch is always implied (as with Aniston’s unusually modest stripper) or faked (as with Poulter’s spider-bitten testicle).

As she did in Horrible Bosses, Aniston trades - though a bit less effectively this time - on the novelty of a TV sweetheart going raunchy. Sudeikis is solid and the supporting cast gives some deserved screen time to Nick Offerman (from TV’s Parks & Recreation) and Kathryn Hahn (from Step Brothers).