Why Don’t You Play In Hell? 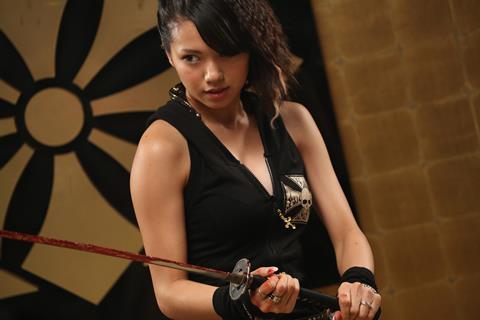 Sion Sono’s rousing, freewheeling, scattershot and ultimately astonishingly bloodthirsty film is a classic cult title that will keep midnight movie fans entertained and amused (as well as possibly a little bemused by its overly complex over-the-top shenanigans), especially as it really hits its stride in the final 45 minutes and revels in a sword-fight sequence that out-gores Quentin Tarantino’s sequence in Kill Bill: Part 1.

It is B-movie schlock to a large extent, but filmed with a certain zeal and appreciation of movie in-jokes.

The wonderfully garishly titled Why Don’t You Play In Hell? (Jigoku de nae warui), which world premiered at the Venice Film Festival and has been acquired in the US by Draft House Films, is a playful blending of Yakuza conflict while also acting as tribute to filmmaking, and while the line-delivery is based around the shouting technique for most of the time (this is not a quiet film), there is also a whole lot of B-movie fun to be had.

It takes a while for the film’s several story strands – a gang of young wannabe filmmakers who relish filming violence; a stand-off between two rival Yakuza gangs; the antics of a child advert star moppet turned would be adult actress and the callow youth who has adored her for years and will do anything for her – but once they collide properly the film finds its real momentum. It was shown in Venice in the close to two hour-long directors cut version.

The bright and breezy opening is of the pretty young Mitsuko, who sings and performs a dance in a television toothpaste commercial (this proves a key plot point as the bizarrely complex film develops) but her stardom is ruined by a Yakuza attack on her home (her father happens to be a mob boss) that sees her mother jailed for fighting off the attackers with a knife.

Ten years later with her mother due for parole Mitsuko (played by Sono’s Himizu star Fumi Nikaido) is starring in a film financed by her father, but she leaves halfway through then shoot to take revenge in a man who abandoned her (cue to blood curdling scene she makes him chew broken glass by French-kissing him when he has glass in his mouth).

Her father (veteran actor Jun Kunimura, who starred in John Wood’s Hard Boiled) pledges to finish the film for his wife, and by a ridiculously roundabout route ends up recruiting a shrill band of film geeks who call themselves ‘The Fuck Bombers”.

The bloody conclusion sees both Yakuza clans buying into the notion that their epic showdown should be filmed by the nerdy crew, leading to an astonishing – and often very funny – bloodbath of swords, martial arts and machine guns, as hordes die in increasingly bizarre ways. It is B-movie schlock to a large extent, but filmed with a certain zeal and appreciation of movie in-jokes.

The performances are shrill and broad, though Fumi Nikaido is sexy and funny as the petulant Mitsuko, while Shinichi Tsutsumi is genuinely amusing as rival yakuza boss Ikegami.

Silly (the blood spurts everywhere, but never lands on Mitsuko’s father’s bright white suit) and often hysterical in structure, the film is punctuated with delightfully framed sequences (a slide by the young Mitsuko across a bloody floor is lovely) and a sense that writer/director Sion Sono is simply having a bit of fun…and if audiences buy into his subversive craziness there is a good deal of bloody fun to be had on the journey.