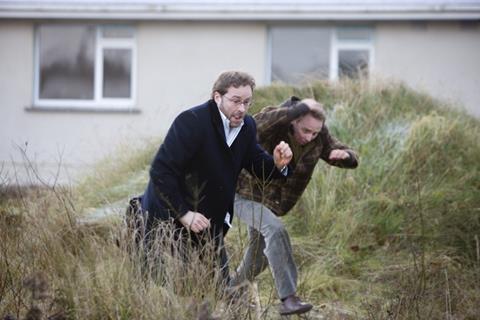 A melancholy, miserabilist buddy comedy with a fondness for strained eccentricity, Wide Open Spaces is a very acquired taste indeed. A game cast extracts scattered laughter from the mixture of weird situations, deadpan banter and oddball characters but the sketchy, rambling script never coheres into an engaging whole. Theatrical prospects look as bleak as a Samuel Beckett play.

Beckett’s style seems to have been something of an inspiration for screenwriter Arthur Mathews, the co-creator of cult television comedy Father Ted. He fashions a latterday Vladimir and Estragon from Myles (Ardal O’Hanlon) and Austin (Ewen Bremner). The duo are the best of friends for no discernible reason and rather than waiting for someone who never arrives they are in flight from gambling debts and an e-Bay scam involving fraudulent George Best autographs.

Accepting work as labourers for businessman Gerald (Owen Roe) on a soggy building site in rural Ireland, they share digs in a dilapidated corrugated iron hut reminiscent of Charlie Chaplin’s in The Gold Rush. Their task is to prepare the way for Gerald’s brain wave; a theme park celebrating the famine with stick-thin local girls playing the victims and a bright pink ship-themed restaurant to serve the visitors. Unpaid, unhappy and embroiled in a national scandal, the duo find their friendship tested to the limit.

Wide Open Spaces struggles to find the pathos in the travails of these two lost, defeated souls. The screenplay never helps establish an emotional attachment to the characters and is sparing when it comes to revealing any kind of back story.

Ewen Bremner is cast to type as the gormless sidekick who sees the world through the excitable innocence of a child. His expressive features and wild-eyed responses to the more absurd developments would be perfect for a more traditional farce. Ardal O’Hanlon brings a battered dignity to the role of the more jaded, world-weary Myles, a man repeatedly congratulated on the lovely timbre of his voice.

Individually, both actors are effective but there is a lack of chemistry between them which undermines the duo’s bid to be regarded with any of the  indulgent affection awarded to Laurel and Hardy, for example. Owen Roe comfortably inhabits his role as the blustering, corrupt businessman Gerald but other cast members are encouraged towards grotesque caricature, especially Morwenna Banks as Leonie, an eccentric, aristocratic gallery owner who drifts in and out of the story.

Cinematographer Tim Fleming favours a muddy palette that lends a drab, end-of-the-world feel to the film. Director Tom Hall’s decision to let events unfold at an unvarying pace further underlines the film’s lugubrious nature, making the rosy ending revealed over the closing credits seem out of kilter with what has gone before.

While its brief running time is a mercy, even at 85 minutes Wide Open Spaces wears out its welcome.