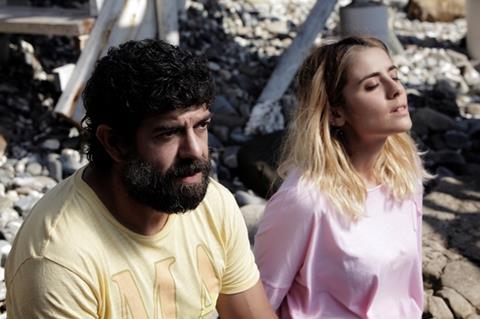 An impressively moody and magnetic lead performance from Pierfrancesco Favino as a muscular debt collector who ends up falling for a pretty young prostitute (Greta Scarano) helps give actor-turned-director Michele Alhaique’s modest drama an edge. While nicely shot, it is all rather familiar, but both Favino and Scarano have real quality and help the story just about rise above the clichés.

Scarano is vibrant and sparky while Favino has a glowering but oddly gentle persona that suits the character perfectly.

Without Pity (Senza Pieta), which had its premiere at Venice, trawls familiar territory, but does so with a certain gritty charm, making great use of suburban Rome’s outskirts and letting a series of strong performances shine through.

Towering, burly and bearded Mimmo (Favino) works as a Mafia debt collector. He is loyal to his uncle, who heads the mob, but doesn’t like taking orders from his boss’s sleazy son Manuel (Adriano Giannini), who takes advantage of his position by indulging in booze, partying and women.

Mimmo is told to meet prostitute Tanya (Scarano) who’s been hired to ‘entertain’ Manuel, but he is given the wrong date and has to reluctantly spend time with her. He relishes us quiet life away from his work and hates having her in his small flat. In familiar film fashion this enables him to get to know the feisty and flirtatious Tanya, who seems equally drawn to the brutal but oddly gentle Mimmo.

The next day he dutifully delivers Tanya to Manuel, but when he fancies some sadistic sex play Mimmo returns to stop him in a  deadly fashion. Soon Mimmo and Tanya are on the run from he former mob friends and seek help at the seaside home of Mimmo’s Caribbean housekeeper Pilar (Iris Peynado), a sadly rather clichéd character , there to act as a caring mother figure and offer a home next to the beach.

It all follows a pretty predictable route as the pair try and deal with their somewhat difficult future. It all looks very good, with plenty of nicely shot close-ups and good use of the widescreen format, but there is a niggling and uncomfortable simplistic sexism to the film – plenty of lingering shots of Scarano’s breasts and legs – which detracts from the fine performances and strong sense of atmosphere.

But both Scarano and Favino come out of the film with credit though, and there is a nice understated chemistry between them. Scarano is vibrant and sparky while Favino has a glowering but oddly gentle persona that suits the character perfectly.