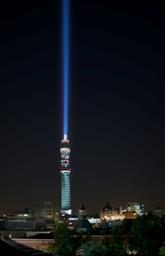 A vast blue streak illuminated the skies last night as London played host to the world’s largest lightsaber, housed by the BT Tower, as part of a celebration of the release of Star Wars: the Complete Saga on Blu-Ray.

Over 60 high-powered lights each weighing 124kgs were used in unison to create the 200m ray of light emanating from the top of the already 189m tall building.

C-3PO actor Anthony Daniels said: “London played such a huge part in all six Star Wars films, so it’s fitting that we’re all here today to transform the London skyline and send a message to galaxies far, far away.”

The event was strongly attended by a number of Star Wars legends including C-3PO, R2-D2 and Boba Fett.