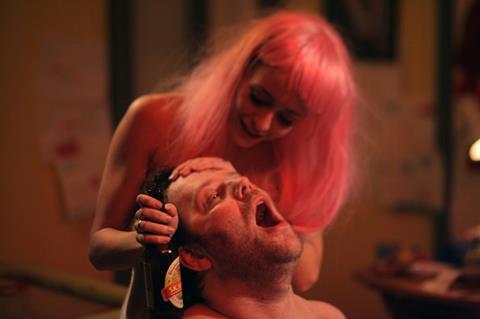 A freewheeling tale of spiraling excess – sex, drugs, food, booze and power are all abused – Icelandic film XL (though perhaps XS could have been as good a title) is a mesmerising mélange of chaotic images and is intriguing and provocative rather that satisfying or insightful, but there is no denying the sheer ramshackle energy involved.

To begin with the film’s descent into Leif’s colourful and vivid world is compelling, provocative and fascinating, but the sheer freewheeling mania of his romp through Iceland’s underbelly simply gets wearing after a while.

The film, which has opened in Iceland, also screened in competition at the Karlovy Vary International Film Festival. Perhaps just too unfocused and full-on for most distributors, it does have a certain energy and power and as a not-so-subtle commentary of how power corrupts (and clearly the subtext is the Icelandic economy and its collapse of some years ago) it could well feature on the festival circuit.

The film’s ‘hero’ is Leif Sigurdarson (Ólafur Darri Ólafsson), a portly, bow-tie wearing, politician who is told by his boss – and friend – the Prime Minister (Thorstein Bachmann) that after his latest dose of bacchanalian excess he needs a stint in rehab. Thinking this may actually be a cunning political move, Leif plans to blackmail the Prime Minister, before heading off into another series of moments of excess.

The freewheeling structure dip back and forth in time, and is used mainly as an illustration of his antics. A booze and drug fuelled bearded wastrel, he is a neglectful father; a vain and arrogant politician and loves nothing more than alcohol fueled sex parties with his bondage-loving lawyer Kristina (Elma Lisa Gunnarsdottir) or his young girlfriend Aesa (Maria Birta Bjarnadottir). Quite why anyone finds him charming or remotely sexually attractive is never clear.

To begin with the film’s descent into Leif’s colourful and vivid world is compelling, provocative and fascinating, but the sheer freewheeling mania of his romp through Iceland’s underbelly simply gets wearing after a while and the film becomes a repetitive scenes of excess rather than any kind of commentary on the man or the situation.