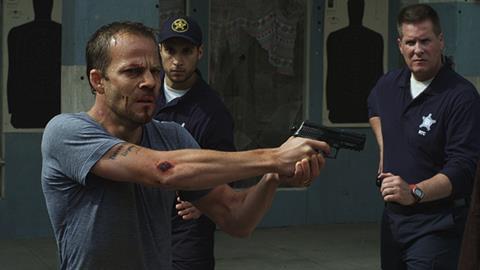 24 meets Buried in Brake, a sweaty, claustrophobic B-movie conspiracy thriller carried on the shoulders of a committed, almost masochistic performance from Stephen Dorff. A Twilight Zone-style premise is persuasively sustained throughout a trim running time until falling apart in the final stages and risking the possibility of leaving audiences feeling short-changed.

The dialogue and plot twists verge on the clunky but cinematographer James Mathers makes the most of the confined space.

Dorff lacks the box-office allure of a Ryan Reynolds, which suggests a future for Brake tilted more towards ancillary markets than theatrical success.

Dorff’s Secret Service Agent Jeremy Reins awakens to find himself trapped within a Perspex coffin-like box in the boot of a car. He assumes it is the consequence of a lingering gambling debt.

He soon discovers otherwise when a postcard of The White House is sent into the box with a message stating ” Give Us The Location Of Roulette”. Trying to unravel the details of what appears to be a terrorist plot drives the plot and helps turn the screws on a desperate Reins as he is subject to intense physical discomfort and emotional blackmail.

Brake is a one-man show for the majority of its running time but screenwriter Timothy Mannion counters any threat of monotony by giving Reins first a radio receiver and then a mobile phone that allows him to communicate with a wider world that includes his estranged wife Molly (Chyler Leigh) and his fellow agent Ben Reynolds (Tom Berenger in a brief appearance).

Reins is attacked by a swarm of bees, burnt, shot and terrorised during his confinement and Dorff is required to become something of a contortionist as he squirms inside his coffin and is battered and bloodied by his road trip.

The dialogue and plot twists verge on the clunky but cinematographer James Mathers makes the most of the confined space and a ticking, luminous digital clock to ensure that audiences share a palpable sense of Reins being trapped and running out of options.