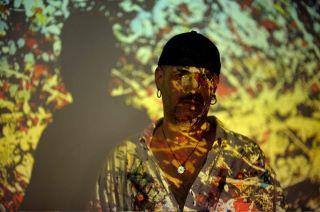 Calvet is a film about a man acknowledging the terrible mistakes he has made in his past and trying to now make up for those sins. It might sound a familiar – almost clichéd – format, but Jean Marc Calvet’s story is nothing less than gripping and powerful.

Calvet’s artistic work is colourful, vivid and dynamic, and the man himself is never less than intriguing and provocative.

The structure might be simple, but Dominic Allen’s film is blessed with a subject who is never anything less than honest, reflective and compelling, and while on the surface Calvet appears to be a tough man – shaven, bulky and heavily tattooed – there is an awful lot going on beneath the surface.

Now a successful painter living in Nicaragua with his wife and their deaf-mute daughter (who he gently encourages to paint), he has led a brutal and harrowing life. Having served in the French Foreign Legion years before, he eventually settled down in France with a partner and a young son. Recruited to be a bodyguard – at a time when he was into drink and drugs – he abandoned her and his son and ending up stealing money from a client and escaping to South American where he embraced a life of drink, drugs and violence.

Calvet’s artistic work is colourful, vivid and dynamic, and the man himself is never less than intriguing and provocative. Dominic Allen and he head off on a journey through his past, revisiting the streets in Cannes where he was a bodyguard to the stars (Mel Gibson and others); onto the US where he stole the money, and to his former house in South America where he locked himself away for three months, took drugs, mulled over death, dwelled on the mistake he made and discovered his love for painting.

The final section sees him trying to find his son in France and to try and offer some sort of explanation for his actions. A scene of him talking to his son – now a teenager – on the phone of the first time is the only time you see Calvet struggling for words. It is a moving sequence. In a nicely judged final scene Allen shows Calvet finally meeting his son not on film, but in a series of black-and-white photographs. It is appropriate and respectful, and is a nice end of a finely judged film.