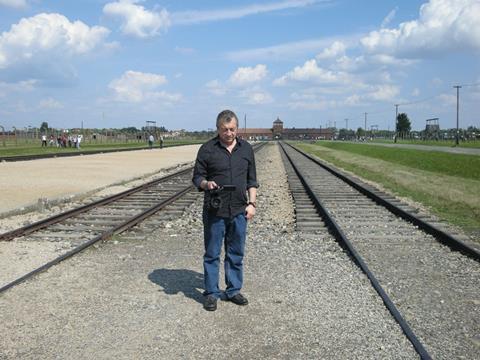 As a director Philippe Mora has had an eclectic career which includes the likes of controversial ‘70s documentary Swastika, Christopher Walken starring sci-fi blockbuster Communion and the eloquently titled Howling II: Stirba - Werewolf Bitch.  His latest film follows in the footsteps of his recent works, being a home-made affair in which he takes centre stage amidst a freewheeling narrative that blends conspiracy theory, musical, comedy and cheerful blasphemy.

Continuity is not a film to look for polished and highly technical filmmaking. But as a genuinely subversive, funny and sometimes thoughtful slice of avant-garde cinema it succeeds admirably.

Recently receiving its world premiere at the New Horizons Film Festival in Wroclaw (where Mora has been a popular guest over the past few years and some locations of which appear in the film itself) the film is aimed squarely at a festival audience which will appreciate the leaps in logic and air of irreverence.

Mora takes the lead as ‘Agent Peter Lorre’ a codename for a CIA agent embroiled in a plot to destroy Communism by proving that God exists. To do so, a government agency employs ‘remote viewers’ to go back in time and witness the Crucifixion and then report back. But Lorre finds himself adrift in time and – as his situation becomes fractious – so does the film’s narrative. Add in some new trainees, a Nazi remote viewer who doesn’t realise that Hitler lost and a roll of pink duct tape (which is a sign of something very bad indeed) and Agent Peter Lorre has more than his hands full.

At the beginning it’s easy to dismiss this as an indulgent piece of pretentious film art. While there’s certainly a touch of indulgence, there’s enough wit and charm here to let it slide. This is essentially a comedy sci-fi movie created out of nothing more than editing together a series of – seemingly improvised - monologues shot in various locations around the world. Whilst the plot is ridiculous (but no more so than your average Hollywood blockbuster) it soon becomes strangely compelling and the low-fi shenanigans on offer become something of a virtue.

Mora himself is an engaging lead - shifting accents and costumes with a childlike glee – whilst his supporting actors are certainly enthusiastic. Despite the irreverence and appropriate disregard for propriety on display, there’s also a real intelligence at work here as the film deconstructs genre and the notion of movie-making itself.

Continuity is not a film to look for polished and highly technical filmmaking. But as a genuinely subversive, funny and sometimes thoughtful slice of avant-garde cinema it succeeds admirably. Where else would you hear a song that includes the line “… these tits changed history.”?