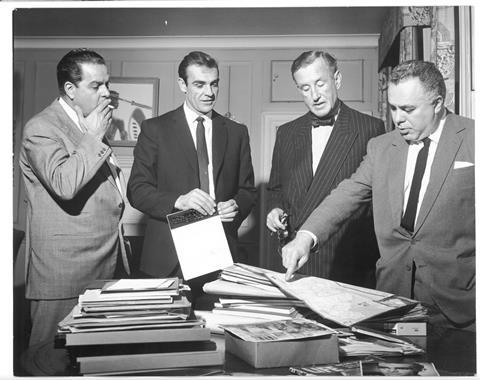 With the latest James Bond film, Skyfall, looming the arrival on the big-screen of this fascinating and enthralling documentary that celebrates 50 years of 007 at the movies is cause for celebration. It is the enthralling story of how a British spy made it from literary icon to the greatest of Hollywood film franchises.

Smartly Everything Or Nothing resists the temptation to get obsessed and diverted with the cars, guns, Bond girls, music and pop culture impact.

The title refers to the acronym for the company that become forever linked with the James Bond films, Eon Films, with the heart of the film focusing on the three men who shared the determination to bring Bond to the big screen, author Ian Fleming and producers Albert R. Broccoli and Harry Saltzman. Blending a series of interviews with film and broadcast footage as well as material from the Eon’s extensive archive, the film offers a nicely rounded view of the franchise.

The film has a brief theatrical life, opening in the UK on October 5, – and it does look good on the big screen – but will also most likely be popular on TV and home entertainment, as well as easily slotting into cinematheque and festival programming. Admirably it pulls no punches in dealing with the darker side of the story, though in truth it could easily have been longer, with presumably more material lying on the cutting room floor.

Sensibly Everything Or Nothing starts at the very beginning – and utilises a very clever opening montage of all of the Eon Bonds in their famous pre-credits scene of them seen through the barrel of a gun and turning and shooting - and on Ian Fleming.

A complex character who served in Navy intelligence during World War II, it s clear Bond became his alter ego and allowed for his full expressions on violence, women, guns, clothes and cigarettes. There are the well-known stories – via archival interviews with Fleming – about where the names James Bond came from (the author of a book about birds of the West Indies) and how he worked at his home Goldeneye in Jamaica, but also fascinating recollections of those who knew him, including her former companion Blanche Blackwell who recalls that the first words he said to her were “I do hope you’re not a lesbian”, before passionately kissing her.

The film then moves into the story of how two ambitious producers, Albert R Broccoli (know to all as ‘Cubby’) and Harry Saltzman pursued and finally snagged the rights to the Bond books. This, of course, came after a poorly judged American TV adaptation of Casino Royale (where the character became Jimmy Bond), but set in motion a film series that has lasted five decades.

The film dwells impressively on how Dr No finally came about and how Sean Connery was cast (Fleming famously did not approve), and benefits from impressive family footage from the Broccoli and Saltzman families. In fact the notion that the films were originally very much ‘family’ projects is engaging, and sets the tone for how Broccoli wanted the franchise to continue.

Sean Connery is the only one of the Bond actors not to be formerly interviewed for the film, but there is plenty of archival material of him on set or interviewed to detail his ascent to stardom and eventual disillusionment with the series…a combination of extreme intrusion he felt while shooting You Only Live Twice in Japan and the sense that he should have been receiving better renumeration.

Director Stevan Riley (who made cricketing documentary Fire In Babylon) takes an essentially chronological path through the Eon Bond history. That original black-and-white Casino Royale is touched on - though the 1967 David Niven version is not mentioned – and impressively there is quite a lot of detail about Kevin McClory and the court case around Thunderball that would come back to haunt the Eon franchise.

Equally frank is how Saltzman ran into financial problems and went onto sell his share in the company to United Artists. Barbara Broccoli talks candidly about concerns that the series had run its course as times and tastes changed, and how the famous union flag parachute scene at the beginning of  The Spy Who Loved Me helped consolidate both Roger Moore’s tenure as Bond but also prove the franchise could continue without Saltzman.

In fact Roger Moore is perhaps the best interviewee, with his trademark playful humour perfect here, especially as he recalls  - given his position as a UNICEF Goodwill Ambassador - with mock horror a scene in The Man With The Golden Gun where he pushes a young boy off a boat and into the river.

George Lazenby, Timothy Dalton and Pierce Brosnan all offer there own insights into the role and its impact on them, and while there is little material with Daniel Craig there is a sense the film is more interested in the origins and early days of Bond rather than where the character is now. In fact there is a niggling sense that the last decade or so of Bond history is rather rushed (perhaps because it is so close and has been so well-covered), when interviews with some of the later directors who have worked on the franchise might have been a nice addition.

Smartly Everything Or Nothing resists the temptation to get obsessed and diverted with the cars, guns, Bond girls, music and pop culture impact (though Bill Clinton pops up to talk politics for a while) and instead focuses on the core story of how three determined men created a phenomenon.