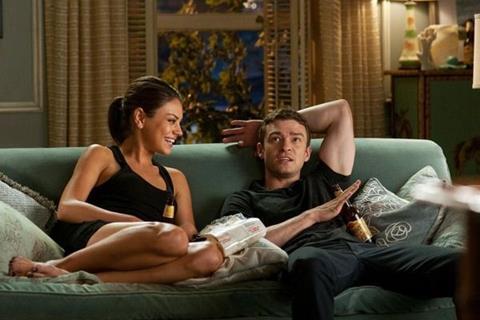 R-rated romcom Friends With Benefits talks like an adult but acts like a teen. The clash between perky style and verbally risque content detracts from the appeal of a strong cast led by Justin Timberlake and Mila Kunis and could make this self-consciously snappy modern love story a bit of a tricky sell at the summer box office.

Still, with Timberlake and Kunis both coming off Oscar winners (The Social Network and Black Swan respectively) worldwide distributor Sony should be able to snag a fairly broad initial audience when the film opens in North America (on the studio’s Screen Gems label) on July 22. And the star appeal may lead to an above average performance when the film rolls out internationally towards the end of the summer.

Timberlake’s LA-based art director Dylan meets Kunis’ feisty corporate recruiter Jamie when she head-hunts him for a big job in New York. Well matched, but wary about romance, the two agree to add casual sex with no emotional involvement to their friendship. The relationship goes through its ups and downs but there’s little doubt that the outcome is going to be the same as it was in No Strings Attached, the similarly themed romcom hit released last January.

Director Will Gluck gives the action the same kind of breezy tone he gave last year’s sharp high school comedy Easy A, a tone that’s enhanced by a soundtrack packed with bouncy indie pop songs. The approach works at first but eventually makes the film feel forced and overly choreographed. While there’s some fairly raunchy talk about sex, the sex scenes themselves are surprisingly coy.

Timberlake (whose R-rated comedy Bad Teacher hit US cinemas only three weeks ago) and Kunis are well cast, though neither seems completely comfortable with the script’s Hepburn/Tracy-style banter. The most enjoyable performances come from the supporting cast, with Patricia Clarkson echoing her Easy A role as Jamie’s irresponsible mother and Woody Harrelson having fun as an aggressively gay sports writer.