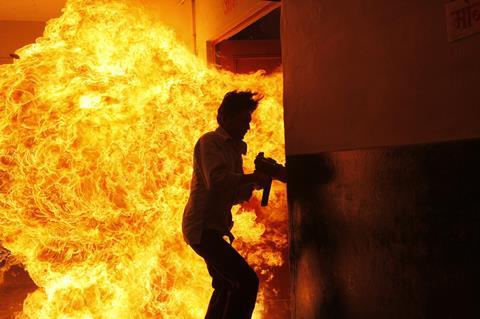 Though it runs at over five hours, there’s never a dull moment in this Indian gangland epic by one of India’s hottest indie directors, Anurag Kashyap. Oozing visual style, laced with tight and often blackly comic dialogue, bolstered by tasty performances and a driving neo-Bollywood soundtrack, this Tarantino-tinged Bihari take on The Godfather has what it takes to cross over from the Indian domestic and Diaspora markets to reach out to action-loving, gore-tolerant theatrical and auxiliary genre audiences worldwide.

With characters appearing and disappearing as the bloodshed takes its toll, Gangs is set to the rhythm of a fast-paced dance.

The broad canvas and the genre focus suits Kashyap well. The director’s previous outings, from No Smoking to That Girl in Yellow Boots, feel a little like trial runs for this confident coming of age work, which despite the extended running time is given discipline and focus by the genre frame and the director’s deft control of gritty atmosphere and jaded, street-smart tone.

It takes some initial effort for non-Indian viewers in particular to make sense of the sheer weight of exposition needed to get the story going and to remember who’s who and how they’re all related, but voiceover, character-naming captions and sparing use of flashback and flashforward help clear things up, and after an hour so we know our way around. The film was split into two reasonably self-contained parts of 160 and 158 minutes for its Cannes Quinzaine debut, and maintaining this division into Gangs I and Gangs II would give reluctant exhibitors some Kill-Bill-style programming flexibility.

Wasseypur is the district surrounding India’s coal capital, Dhanbad. It’s coal that provides the story’s historical starting point, after an opening baptism of fire sequence involving a gangland raid on a rival family that will be reprised, and explained, around five hours later.

A voiceover tells us that the story we’re about to see centres on two rival Wasseypur clans, the Khans and the Qureshis. It’s not a religious war - both are Sunni Muslim families – but a clan conflict born out of old rancours and strategic alliances. Backtracking to 1940, the film then uses a mix of voiceover, captions and action to charts the Indian takeover of the lucrative Dhanbad coal mining industry following independence.

Mine owner Ramadhir Singh (Dhulia) begins his rise to business and political dominance of the area by securing a contract to run a group of mines; he enlists former bandit Shahid Khan (Ahlawat) as his muscle man, but after a falling out sends a hit man to wipe out him and his family. However, Shahid’s son Sardar (played by Bajpayee once he becomes an adult) escapes and is nurtured on the desire for revenge against Singh, who has meanwhile become a powerful, corrupt politician with the entire district under his sway.

The impulsive, wily but not entirely bright Sardar rises to become a powerful underworld boss, but is cowed by both his wives – Nagma (Chaddha), a sort of youthful Mama Corleone who gives her husband three sons, and initially simpering Durga  (Sen), who shows her claws when Sardar abandons her and her son Definite. The latter, together with Nagma’s sons, serious Danish (Singh) and pot-smoking Faizal (Siddiqui) will become the key players in the family dynasty after Sardar is eliminated by the rival Qureshi clan – butchers by trade and by inclination.

The script alternates engagingly between scenes of sometimes stomach-churning violence and moments of domestic comedy, made more tasty by hard-boiled lines of dialogue like “in Wasseypur even the pigeons fly with one wing, because they need the other to cover their arse”. Locations have a dirty realism, but lighting and a real feel for colour matches keep things cinematic; it’s as if the camera keeps searching for beauty and pathos amidst the squalor.

With characters appearing and disappearing as the bloodshed takes its toll, Gangs is set to the rhythm of a fast-paced dance. Khanwalkar’s inventive, adrenalin-driven soundtrack nails the pace beautifully, switiching effortlessly between Spaghetti western trombone melodies and driving electronica melds of hip-hop and traditional music. Characters sometimes break into dance numbers, but these are always embedded in the action; and the song lyrics often comment sarcastically on what’s happening onscreen, as if mouthed by a Greek chorus of street punks.