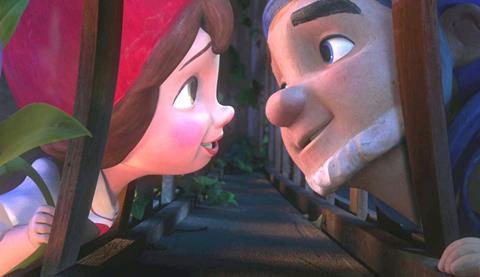 The much-loved – and much-filmed – Shakespearean classic Romeo And Juliet gets the 3-D animation treatment in the engagingly accessible Gnomeo & Juliet, which transplants the classic tragic romance into two British back gardens where garden gnomes put a rom-com spin on the tale of warring factions and forbidden love.

The 3-D animation is bright and spirited, with director Kelly Asbury (who made Shrek 2) and his team of animators doing a fine job in portraying the broad range of garden ornaments as engagingly ordinary and pleasantly plump.

The film has opened well in both the US and UK, and while extremely English in both tone and casting, it clearly have the appropriate sense of family-orientated fun to click with audiences. Given it is produced via Elton John’s production company Rocket Pictures it also benefits from a toe-tapping soundtrack which should also aid cross-over potential.

The conflict between the garden gnomes – the reds and the blues – is played out largely in the Stratford-Upon-Avon gardens of bickering neighbours Miss Montague (voiced by Julie Walters) and Mr Capulet (Richard Wilson), where an uneasy peace exists, apart from when it comes to a drag-racing style tussle between blue-gnome hero Gnomeo (James McAvoy) and his dastardly red-gnome rival Tybalt (Jason Statham) as they engage in lawn mower racing in the alleyway next to the gardens.

During a night-time escapade Gnomeo meets the feisty Juliet (Emily Blunt), but given it is dark and they are both disguised they initially don’t realise they are from rival factions. But even when the truth is revealed there is no getting away from the fact that the pair are smitten – leading to an escalation of hostilities between the two tribes.

The turf war gets increasingly aggressive as the reds and blue engage in various attacks on their rivals – with most amusement coming from a team of Bond-esque bunnies, a love-lorn plastic flamingo and even voice-cameos from Hulk Hogan (as a terrifying lawn mower of all things) and Dolly Parton – though it takes the true love between Gnomeo and Juliet to eventually bring peace between reds and blues.

The voice casting is near perfect, with James McAvoy and Emily Blunt nicely energetic and youthful as the star-crossed lovers, and Michael Caine (as her father Lord Redbrick) and Maggie Smith (as his mother Lady Blueberry) appropriately soulful and elderly. Action star Jason Statham is perfect as the evil Tybalt, and evil Ozzy Osbourne is oddly appropriate as Tybalt’s dumb-but-loyal best friend Fawn.

William Shakespeare himself even make a brief cameo, with Patrick Stewart providing the voice of a statue of Shakespeare in a Stratford-Upon-Avon park that offers a few words of wisdom to an exiled Gnomeo, which prompts his return to the garden.

The 3-D animation is bright and spirited, with director Kelly Asbury (who made Shrek 2) and his team of animators doing a fine job in portraying the broad range of garden ornaments as engagingly ordinary and pleasantly plump…just as a gnome should be.  Elton’s John’s music helps the pace of the film, which smartly runs under 90 minutes, and has enough in-jokes to keep adults amused and enough gambolling slapstick to keep young ones laughing.