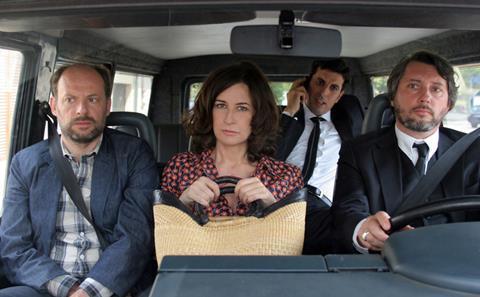 A hand-picked ensemble elicits a steady stream of low key laughs in Granny’s Funeral (Adieu Berthe), a contemporary French comedy with the potential to amuse audiences wherever it’s shown. The script, co-written by brothers Bruno and Denis Podalydès and directed by Bruno with both men in essential roles, makes the death of harried pharmacist Armand’s (Denis Podalydès) paternal grandmother the mechanism that accelerates a reckoning in Armand’s already complicated love life.

Use of a capella melodies by the Swingle Singers is a glorious touch.

Slated for a June 20 release in France following its premiere in Directors Fortnight at Cannes - where its frank humour and unpretentious approach was welcome - this is a light and silly riff on love, death and human foibles. The film – which has original title of Adieu Berthe: l’interrement de mémé – is particularly good at showing how mobile phones have become full-fledged family members and text messages the modern equivalent of a Greek chorus.

With an ensemble cast this size, it takes a while for the relationships between players to be fully set in motion, but getting there is much of the fun.

The late Berthe is described as having been so discreet that nobody gave her much thought. Her son, Arnaud’s father (Pierre Arditi), is a jovial fellow in the grip of advanced memory loss, meaning Armand must manage all the funeral details. Burial? Cremation? Inertia?

Armand and his wife Helene (Isabelle Candelier) run a small pharmacy together in a comfortable Paris suburb. Helene’s formidable mother (Catherine Hiegel) lives upstairs, over the business. Armand and Helene share a decades-long complicity and have two sons, but Armand is head over heels for Alix (Valerie Lemercier), a dentist with a young daughter.

Alix considers herself to be the new rightful owner of schleppy Aramand’s companionship and sexual favors; ever-reasonable Helene is trying to keep him from moving out. Armand is an amateur magician, a hobby whose significance takes on additional comic heft when Armand visits his late grandmother’s retirement home to claim the body.

Helene’s mother, who is pitching in for funeral costs, prefers the hi-tech-meets-New Age ministrations of meticulous Charles Rovier-Boubet (Michel Vuillermoz, a hoot). But Armand hires devil-may-care Zen hipster Yvon Grinda (Bruno Podalydès, also a hoot), who has a sideline in small coffins for domestic animals.

As compound pressures and obligations come crashing in on Armand, viewer sympathy is aroused. What more could possibly befall the poor guy in such a compact time frame? A lot, it so happens. Under the well oiled farce lies a bittersweet meditation on how much it is ever possible to truly know somebody else, blood relative or not.

Mostly sunny warm weather photography goes well with Armand’s crestfallen and put-upon demeanor. Use of a capella melodies by the Swingle Singers is a glorious touch.