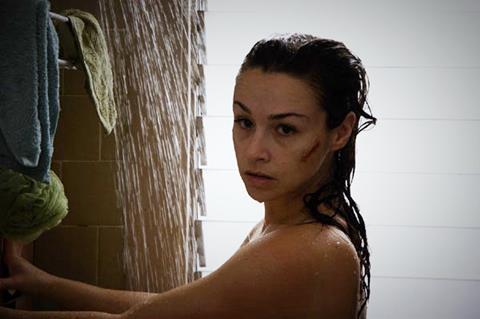 Generously received at its world premiere at London’s FrightFest, where Adam Green has a status one rung down from Godard or Spielberg.

Unlike everyone else from the first film, Marybeth survives the night … but foolishly enlists Reverend Zombie (Tony Todd), a voodoo charlatan, to assemble a posse of new-and-doomed characters to return to the shunned Honey Island Swamp, ostensibly to retrieve her father’s corpse but actually to exorcise the corporeal but ghostly hatchet-wielder.

Though generously received at its world premiere at London’s FrightFest, where Adam Green has a status one rung down from Godard or Spielberg, Hatchet II is a likely DVD and cable filler rather than a theatrical attraction.  Noticeably cheaper, more padded and hastily thrown-together than Hatchet, it’s a step back for Green after the increased ambition and sophistication of Frozen and (especially) Spiral.

The cast is studded with horror vets from both sides of the camera, with Hodder (a former Jason) as the identikit menace, Todd (of the Candyman series) and Harris (a Halloween regular) doing familiar shtick. Support comes from director Tom Holland (Fright Night) as the heroine’s uncle, R.A. Mihailoff (a former Leatherface) as a hunter big enough to grapple the killer (and come off badly in one of many set-piece make-up effects deaths liable to produce groans rather than shrieks) and Parry Shen returning from Hatchet as the twin brother of a previous victim.