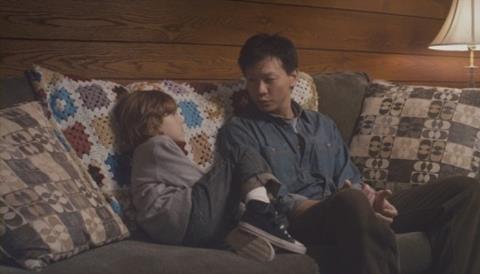 A thoughtful and often heartbreakingly honest story about a gay man fighting for custody of the young child he has raised with his recently deceased partner, In The Family is an impressively played drama that – despite its lengthy running time – is intelligently understated but on the mark in terms of the issues it raises.

The film has played at film festivals – and showed at the Glasgow Film Festival in the UK – and following a limited platform release in New York is set to expand to 40 screens through the US in April.

Self-funded and self-distributed, In The Family is the feature debut for director-writer-star Patrick Wang. It is structured and shot is a very linear and formal fashion – possibly betraying Wang’s theatrical background – and uses plenty of slow sequences and uneasy silences to help heighten the dramatic tension.

After Cody is killed in a car accident, Joey presumes that he will continue to raise Chip, but Cody’s will, which predates his time with Joey, states that Chip’s aunt and uncle (Kelly McAndrew and Peter Hermann) are named as his guardians, and despite their good relationship with Joey they arrange to have Chip taken into their care.

Joey embarks on a legal battle (and his story is also intercut with scenes about how he and Cody first got together), but the thrust of the story is that he is a good and decent man who gets out of his depth in amidst the legal and financial wranglings. He gets sound help and advice in moving fashion from retired lawyer Paul Hawks (Brian Murray), with the closing legal cut-and-thrust staged gently but powerfully.

Patrick Wang’s Joey is an engaging central character – a genial everyman (he works overseeing house refurbishment) who happens to be gay and determined to fight for the child that he loves as a son. The film is carefully shot and structured, and while some prudent trimming would make it possibly more accessible to bookers and cinemagoers In The Family is a story that refuses to be rushed as it eloquently tells its simple and moving tale.