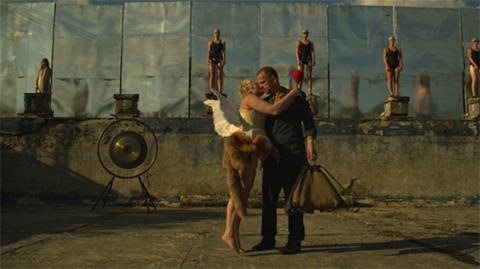 The 2012 Estonian entry for the Academy Awards is a strange and sometimes baffling affair that has the occasional striking moment The film follows Jeremia, a deserter from the Soviet Army who is presumed missing during the Afghan War. Returning to Estonia for his father’s funeral, he decides to stop in the small town where his ex-wife once resided. Soon he is caught up in a web of strange events and encounters with the town’s bevy of damaged women which may be real or in his head. All the while he writes to his daughter who, like his surroundings, may also be imagined.

The dreamlike atmosphere is well rendered thanks to Keedus’ direction and some strong performances.

Its Academy Award credentials may boost its profile alongside its recent screening in International Competition at the 15th Black Nights Film Festival but relatively disappointing domestic box office performance and little international festival interest would indicate that the film will not travel much at all.

As much a series of vignettes as it is a complete narrative, Letters to Angel (Kirjad Inglile) has individually striking scenes such as Jeremia’s visit to a psychologist ending in bizarre sex or his visiting of a performance piece of ‘flying angels’ which seems to have ripped straight from 8 ½. Certainly, there’s a lot to take in as the film tries to tackle issues of globalisation, religion, masculinity and sexuality and – whilst there are some productive ideas – it all feels a bit too opaque.

Whilst the dreamlike atmosphere is well rendered thanks to Keedus’ direction and some strong performances (especially from Tõnu Oja in the lead role), it still feels something of a philosophy essay writ large that would be more suited for the stage than the cinema.